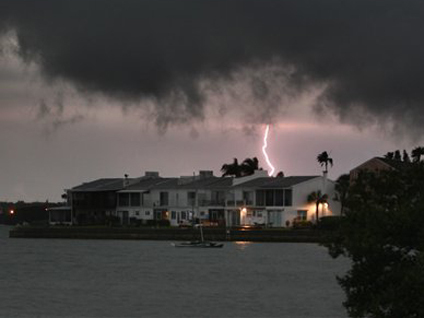 In Lakeland, where several hundred people had gathered for the annual Sun 'n Fun aviation festival, a tent collapsed and injured seven people, authorities said. Authorities said all of the injuries were minor and six were taken to a local hospital.

"The worst injury was a fractured hip," said Polk County Sheriff's spokesman Scott Wilder. He added that 70 people were under the tent when it collapsed and that some crawled out.

"It wasn't like a mass of people trapped in a building or anything like that," he said.

It was the second day of bad weather in the central Florida region. For hours Thursday morning, strong storms swept across Florida, starting in the Gulf of Mexico and traveling east over the I-4 corridor towards Orlando.

By 2 p.m., about 88,000 Tampa Electric Company customers were without power. Downed power lines were spotted in several counties and in the city of Tampa.

Wind gusts of up to 90 miles per hour were felt in Tampa, and emergency crews were responding to a report of a commercial building collapse with no injuries.

A janitor at an elementary school in a suburb northwest of downtown Tampa was taken to a hospital after he was nearly struck by lightning.

"He was dazed and confused," said Gulfside Elementary principal Chris Clayton, who added that many parents kept their children home from school because of the bad weather. At least one community college cancelled classes.

A few small planes had flipped over at the St. Petersburg-Clearwater Airport. Large traffic jams happened on a bridge when a tractor-trailer truck flipped onto two cars — people in all the vehicles refused medical treatment.

There have been multiple reports of small tornadoes across the region. Wind gusts of up to 70 miles per hour were reported in St. Petersburg, where skies turned dark around 11:15 a.m.

On Wednesday, strong winds blew a Carnival cruise ship from its dock at Cape Canaveral and flipped a tractor-trailer on its side while it drove on Interstate 95 in Brevard County. The truck driver suffered minor injuries and was treated at a Titusville hospital.

In Tarpon Springs on the Gulf, officials were handing out sand bags because of fears about flooding at high tide.