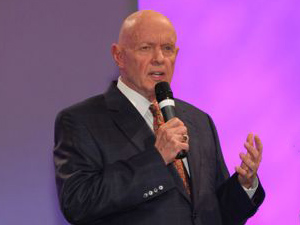 (AP) SALT LAKE CITY - Stephen R. Covey, author of the top-selling motivational book "The 7 Habits of Highly Effective People," died on Monday at an Idaho hospital from injuries he suffered in a bicycle accident in April, family members said in a statement. He was 79.

Covey, who would have turned 80 in October, was founder of a Salt Lake City-based business that evolved into FranklinCovey, a multi million-dollar corporate consulting, training and publication enterprise, according to the firm's website.

Covey, who earned a master's degree in business administration from Harvard University and a doctorate from Utah's Brigham Young University, shot to fame with the 1989 publication of "7 Habits," his self-help guide to success in business.

Covey was hospitalized after being knocked unconscious in the bicycle accident on a steep road in the foothills of Provo, Utah, about 45 miles south of Salt Lake City.

At the time, his publicist, Debra Lund, said doctors had not found any signs of long-term damage to his head.

"He just lost control on his bike and crashed," Lund said. "He was wearing a helmet, which is good news."

Covey is the author of "The Seven Habits of Highly Effective People" and co-founder of Utah-based professional services company FranklinCovey.

Catherine Sagers, Covey's daughter, told The Salt Lake Tribune in April that her father had suffered some bleeding on his brain after the bicycle accident.

He went on to write several other bestsellers about business management, including "Principle-Centered Leadership," became a favorite motivational speaker on the Fortune 100 circuit and served as a personal consultant to organizations ranging from Procter & Gamble to NASA.

Covey was named one of the world's top 50 business thinkers in 2011 by Thinkers50, a group that compiles that list every other year.

He died at the Eastern Idaho Regional Medical Center in Idaho Falls "due to the residual effects of a bike accident he suffered this past April," his family said in its statement.

In his final hours, Covey was surrounded ``by his loving wife and each one of his children and their spouses, as we sang him his favorite hymns, just as he always wanted,'' the family statement said.