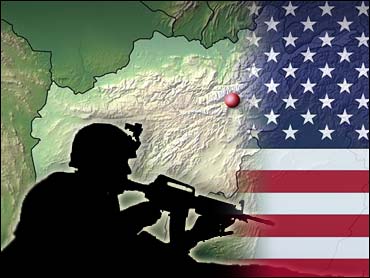 Fierce battles between U.S. and government forces and Taliban-led militants have left about 64 rebels dead, the U.S. military said Thursday, the bloodiest fighting in Afghanistan in nine months. Nine Afghan troops and a policeman were also killed.

Seven U.S. soldiers were wounded in the fighting, which began Tuesday. American warplanes and helicopters pounded bands of militants in clashes in Zabul and Kandahar, two restive provinces in the south of the country.

The Afghan troops died when insurgents ambushed their patrol near Spin Ghar in Kandahar province on Wednesday evening, the worst-ever loss for the new U.S.-trained army, the Defense Ministry said.

A U.S. spokesman, Lt. Cindy Moore, said the troops were killed after climbing out of their trucks. Warplanes from the U.S.-led coalition were called in to help them, and 20 militants were killed in the ensuing battle, Moore said.

"There was an estimated 20 killed in action," Moore said, adding that another six militants were detained.

Three Afghan troops and an American soldier embedded with the unit were injured, she said.

The U.S. military also more than doubled the death toll from a clash the previous day in neighboring Zabul province, saying that 44 militants as well as an Afghan policeman had died in several hours of fighting in an area that has seen repeated large-scale fighting.

The militants killed Tuesday were a "mix of Taliban and anti-coalition militants" who appeared well-armed and disciplined, U.S. spokesman Col. James Yonts said. "They didn't flee, they stood and fought."

Ali Khail, spokesman for Zabul province's governor, said documents found on dead militants showed two were Chechens and one was Pakistani, but U.S. officials wouldn't release their nationalities, saying it might benefit their enemy.

The military had previously said 20 militants died in the battle in Zabul's remote Dehchopan district, about 205 miles southwest of the capital, Kabul. The toll rose to 44 after troops found more bodies.

Yonts said four of the six Americans hurt in that battle were taken to a U.S. military hospital in Germany. Five Afghan police were wounded.

Zabul and Kandahar lie along the Afghan border with Pakistan, in an area where Taliban-led militants opposed to the government of U.S.-backed President Hamid Karzai have revived their three-year-old insurgency after a winter lull.

Afghan Interior Minister Ali Ahmad Jalali said at a news conference Thursday that more than 100 militants and at least 12 Afghan police had been killed in the past month — excluding most of the latest casualties. Several civilians, as well as one U.S. and one Romanian soldier, have also died.

The latest fighting coincided with the installation of a new commander of the 18,000-strong U.S.-led coalition, who said Tuesday he would be "relentless" in battling the insurgency.

Lt. Gen. Karl Eikenberry said he would maintain the approach of bolstering Afghanistan's government while continuing the battle against militants and their leaders — including Osama bin Laden and Taliban chief Mullah Omar.

The number killed on Tuesday was the highest since Aug. 2 last year, when Afghan troops and U.S. warplanes killed up to 70 militants in a daylong battle in the southeastern province of Khost.

Khost is across from Pakistan's Waziristan area, where militants including foreign fighters with al Qaeda links — are believed to have found refuge after the U.S. invasion of Afghanistan in 2001.