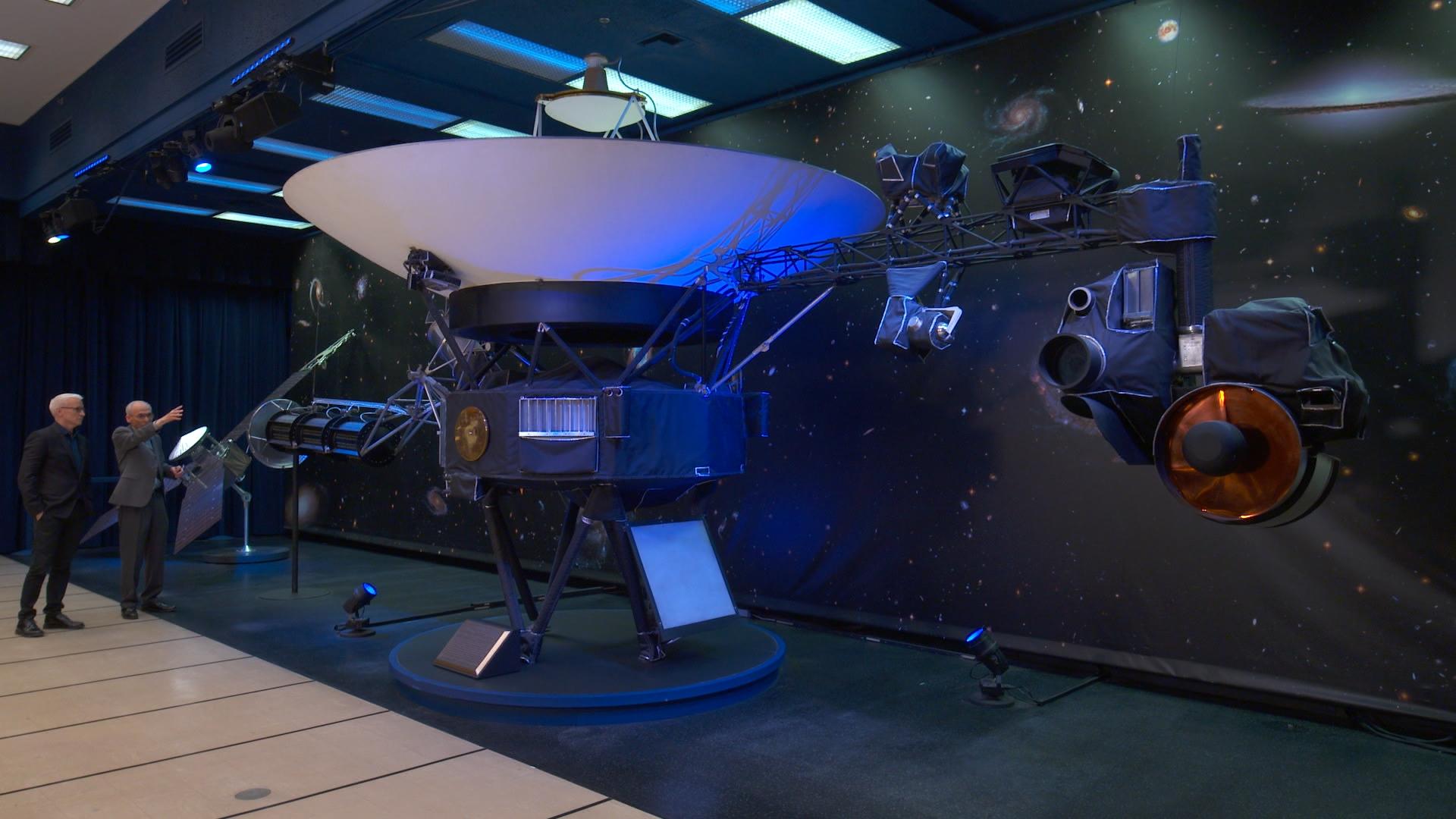 When you think of legendary voyages of discovery you probably think of Columbus and Magellan, or Neil Armstrong walking on the moon. But what may be the greatest journey of exploration mankind has ever undertaken is happening right now. It began in 1977 when NASA launched two spacecraft named Voyager 1 & 2. The mission was only supposed to last four years, but now, 40 years later, against all odds, the two little spacecraft are still out there, traveling beyond the most distant planets in our solar system, reporting back on what they find.  They're the outer-space equivalents of the Little Engine that Could. Nothing manmade has ever traveled so long and so far, and as we first reported last year, wherever they go, they carry with them a message from earth for any other lifeforms that may find them.

When Voyager 1 & 2 took off in August and September of 1977, they had cameras and sensors and something no other spacecraft ever had -- two golden records, filled with music.

"Johnny B. Goode" had no idea just how far he would go.

They've been going ever since. Giving us our first intimate views of the most distant planets in our solar system -- Jupiter, Saturn, Uranus, Neptune and their distinctive moons. What the Voyagers found surprised scientists and made us think about our place in the universe in a whole new way. It was only possible because of a rare alignment of the planets.

Ed Stone: Once every 176 years Jupiter, Saturn, Uranus, and Neptune are lined up in such a manner you can swing by one onto the next time after time over a 12 year journey to get to Neptune. Normally it would take 30 years.

Anderson Cooper: So you lucked out?

Ed Stone: We lucked out. If this had happened, a decade earlier, we would not have had the technology to do it.

Ed Stone is the project scientist for Voyager. He's 82 now, but was 36 when he first took the job at NASA's Jet Propulsion Laboratory in California where the Voyagers were built. Each part was carefully designed and tested. But with the launch date fast-approaching, project manager John Casani and his team learned that the conditions near Jupiter might be much harsher than they expected. They needed extra protection for Voyagers' cables – they needed a quick fix. Casani says they used aluminum foil.

John Casani: We woulda normally used metalized kapton, or mylar, or somethin', you know, more appropriate But we didn't have time.

Anderson Cooper: You just went to a store and got aluminum foil?

John Casani: Well, I didn't know. I said, "Ask my wife. Where do you get aluminum foil?"

Anderson Cooper: And that's part of what is on Voyager.

As seen in the above NASA animation, the spacecraft, foil and all, reached Jupiter in 1979 and took the sharpest pictures of the planet scientists had ever seen.

It was known that Jupiter's Great Red Spot was a massive storm larger than earth. What wasn't known until the Voyagers arrived is that there are dozens of smaller, hurricane-like storms feeding into it. Jupiter's moon Io held surprises as well. It didn't have the cratered look of our moon. And a 25-year-old NASA engineer saw something on Io no else had.

Ed Stone: If you look off to the left of the picture, you'll see an erupting volcano hundreds of miles high.

Anderson Cooper: The white and the blue light, that's an erupting volcano?

Ed Stone: First active volcanoes other than here on Earth.

Anderson Cooper: How big a deal was that discovery?

Ed Stone: Well, it was a major deal because it really told us the solar system was much more dynamic than we had imagined. Each moon had a geologic history. They weren't just old objects heavily cratered. They had a geologic life.

Next to Io -- the moon Europa -- similar in size but that's about all.

Ed Stone: Yeah. Exactly. Suddenly we realized that, what I call our terra-centric view of the solar system was just much too constrained. I mean, nature was much more diverse than we could've imagined.

Saturn's famous rings also turned out to be more complex than imagined when the Voyagers got close to them in 1980 and 81. The rings are mostly made of water ice. Ed Stone calls them "snowballs," but some of them are the size of mountains. The Voyagers also discovered small moons inside Saturn's rings. That Voyager could send back images like these is especially remarkable when you consider its equipment and the computers running it are forty years old.

Anderson Cooper: The technology is really nothing compared to what we have today.

Ed Stone showed us a full-size model of Voyager. Both spacecraft run on plutonium, a long-lasting nuclear source of heat, which is converted into electricity. They carry ten scientific instruments, two of which are cameras.

The Voyagers transmit a constant stream of data, which gets picked up by giant antennas NASA operates in different parts of the world.

To see one of them we drove deep into the Mojave desert, near Barstow, California, to an antenna site known as the Goldstone Complex. There are a lot of scorpions and rattlesnakes out here, but little to interfere with the faint messages still being sent by the Voyagers.

Voyager 1 is now 13 billion miles away from Earth. Its radio signals, which travel at the speed of light, take 19 hours to reach the enormous antennas at NASA's Goldstone Complex. It's remarkable, especially when you consider that the transmitter on Voyager which sends the signals uses less power than the light bulb in your refrigerator.

It's hard to imagine just how far 13 billion miles really is. The moon is about 239 thousand miles from Earth. Mars is about 140 million miles away.  You'd have to go more than 90 times farther than that to reach Voyager 1.

The musical messages the Voyagers carry -- those golden records -- were mounted in a position no alien could miss. They come with a needle and instructions for how to play them.

The records were the work of a team led by astronomer and author Carl Sagan, host of the television series "Cosmos." Sagan wanted to document the sights and sounds of planet earth.

More than 100 photographs are encoded on the discs, along with greetings in 55 languages. Including one from Sagan's son.

Also traveling out there in space: music from Mozart to Louis Armstrong.

The records in space are made of gold-plated copper, but a vinyl version for earthlings was just released this year.

Ann Druyan: That's what I called it "Earth's greatest hits."

Ann Druyan was creative director of the team Carl Sagan put together to collect the sounds of our planet for the two-hour record.

Ann Druyan: It's heavy! It's the arc of human culture.

Druyan was 27 years old at the time and had never worked on a record before. She was the one who insisted that Chuck Berry would get a ride into outer space.

Ann Druyan: It's so great.

Anderson Cooper: Why Johnny B. Goode?

Ann Druyan: To me, Johnny B. Goode, rock and roll, was the music of motion, of moving, getting to someplace you've never been before and the odds are against you, but you want to go. That was Voyager.

Anderson Cooper: Do you imagine the extraterrestrials who discover this tappin' their feet to Johnny B. Goode?

Ann Druyan: That was the joke on Saturday Night Live when Voyager was launched. You know, they broke in and said, "This just in from the extraterrestrials."

The Voyagers haven't found any extraterrestrials so far, but they have contributed to the search for life in space. Their observations of Jupiter's moon Europa suggested there might be an ocean beneath its icy surface, which was later confirmed by another spacecraft, Galileo.  Voyager 2 also sensed that something unusual was happening on Saturn's moon Enceladus.  Many years later, the Cassini spacecraft discovered geysers of water shooting above its surface.

Anderson Cooper: So on Europa and Enceladus, you found water which means potentially there's life.

Anderson Cooper: What kind of life are you talking about?

Ed Stone: Microbial life. Very much like the earth had for billions of years.

After Saturn, Voyager 1 headed away from the planets toward the edge of our solar system. Voyager 2 became the first spacecraft ever to visit Uranus in 1986 and Neptune, the most distant planet in our solar system, in 1989.

Voyager 2 saw Neptune as blue and turbulent with winds gusting up to 1,000 miles per hour.

To celebrate reaching Neptune, the Jet Propulsion Lab had a party. Carl Sagan and Ann Druyan invited a surprise guest.

Ann Druyan: Absolutely. And he came down the steps of the main building at JPL, no one knew he was coming.

Anderson Cooper: Did you dance?

You may have guessed it by now, but Ann Druyan and Carl Sagan fell in love while making the golden record. They got married in 1981.

Nine years later, at Carl Sagan's urging, Voyager 1 turned its cameras towards home and took a series of photographs of the planets in our solar system. You may remember an iconic photo of Earth taken from Apollo 17 when it was 18,000 miles from home. Voyager 1 showed what Earth looked like when it was 3.7 billion miles away.

Ed Stone: In that streak of light which you see.

Anderson Cooper: Wait. That little dot in the center?

Anderson Cooper: It's nothing.

Ed Stone: It gives you a sense of how miniscule our world is even in our solar system, much less our galaxy, much less the universe.

"We have actually sent a message, which will be in orbit in the Milky Way galaxy essentially forever, even after the sun and the earth no longer exist in their current state."

"That's home. That's us," Carl Sagan once wrote. "A mote of dust suspended in a sun beam."  Voyager 1 is now three times farther from earth than when that photograph was taken. Scientists believe Voyager 1 is now traveling in what's called "interstellar space" -- the space between the stars of our galaxy. Voyager 2 is expected to get there in a few years.

Anderson Cooper: So the sun is our nearest star?

Anderson Cooper: And then from the sun what is the next nearest star?

Ed Stone: Alpha Centauri, which is about four light years away.

Anderson Cooper: So Voyager is now in between the sun and that next star?

Ed Stone: It's traveling about 38,000 miles per hour. It travels about a billion miles every three years.

In about 10 years, when the Voyagers' nuclear power runs out, Stone says they'll continue zipping through the vacuum-like conditions in interstellar space. It's very empty out there and they're unlikely to crash into anything. Long after all of us are gone, Voyager 1 and 2 will just keep going and going.

Ed Stone: Think of that. We have actually sent a message, which will be in orbit in the Milky Way galaxy essentially forever, even after the sun and the earth no longer exist in their current state.

Anderson Cooper: Wait. This is, my little mind can't process some of this. Even after the sun and the Earth.

Ed Stone: The sun will become a red giant and envelop the earth and that will happen maybe five billion years from now. These two little emissaries will be out there in their independent orbit basically for billions of years.

Anderson Cooper: It, kind of, boggles the mind.

Ed Stone: That's the reason it was important to send it.

A bigger killer than cancer?