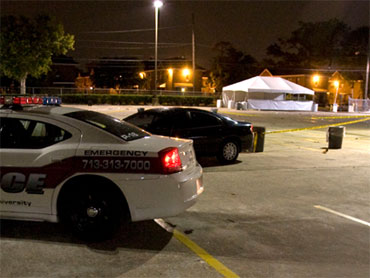 Six people were shot and wounded at a community rally on the Texas Southern University campus in what police believe was a gang-related drive-by shooting, a school spokeswoman said.

Texas Southern is a historically black university in Houston with an enrollment approaching 10,000 students.

Six people were shot, including one male student. They were being treated at hospitals for serious, but non-life threatening injuries, Pickens said.

Campus police believe the incident resulted from a rivalry between two gangs, one from Missouri City, a suburb southwest of Houston, and the other from Fresno, a small town outside Missouri City, she said.

Among the hosts of the community rally was Houston City Councilman Peter Brown, who is running for mayor in November's election.

Lucinda Gwinn, who manages Brown's mayoral campaign, said the rally included a concert by rapper Trae the Truth and was organized by TSU, U.S. Rep. Sheila Jackson Lee, Brown and other council members and officials to promote voter registration.

Gwinn said she had no details on the shootings, but was dismayed that "an effort for bringing a very positive message to the community" would end in violence.