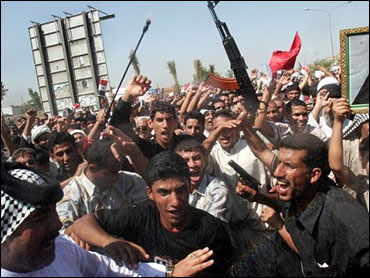 The attackers also grabbed people working in the area, where several travel agencies are based and buses pick up passengers traveling mostly to Jordan, Syria and Lebanon, Lt. Colonel Falah al-Mohamedawi said.

The victims, including two Syrians, were herded into more than a dozen vehicles, according to witnesses. It was not known who was behind the attack.

"They took all workers from the companies and nearby shops," said Haidar Mohammed Eleibi, who works for the Swan Transportation Co. in the Salihiya business district.

He said his brother and a cousin were among those detained, along with merchants, passers-by and even a vendor selling tea and sandwiches.

"They did not give any reason for it," he said. "Police came afterward and did nothing."

Another transportation worker, Amjad Hameed, said 15 cars belonging to police rushed to the area and began randomly seizing people. "We asked them why but nobody replied," he said, adding that Iraqi forces and Americans came to the site afterward.

Haqi Ismail, a 48-year-old electrician, told The Associated Press that the attackers ordered the Shiites to lie down, and before they opened fire, one shouted, "On behalf of Islam, today we will dig a mass grave for you. You are traitors."

The surge in attacks has dealt a blow to Prime Minister Nouri al-Maliki's pledge to curb sectarian violence. He also failed again to reach consensus Sunday among Iraq's ethnic and sectarian parties on candidates for interior and defense minister — posts he must fill to implement his ambitious plan to take control of security from U.S.-led forces within 18 months.

Violence linked to Shiite and Sunni Arab animosity has grown increasingly worse since Feb. 22, when bombs ravaged the golden dome of a revered Shiite mosque in predominantly Sunni Arab Samarra.

CBS News correspondent Elizabeth Palmer reports new statistics from U.S. intelligence measure how much violence has surged. Attacks of all kinds are up 64 percent in the five months from January to May.

On Monday, gunmen in a car killed two Sunni brothers as they were driving to college in the religiously mixed neighborhood of Sadiyah in southwestern Baghdad, police Lt. Maitham Abdul Razzaq said. The victims, Ahmed and Arkan Sarhan, were in their early 20s.

The Joint Operations Center said the mission had "positive effects on the target," but it denied the report that civilians were killed or injured.

The influential Sunni Association of Muslim Scholars, meanwhile, warned the U.S.-backed Iraqi government against participating in any assaults against Anbar, a vast province that stretches from western Baghdad to the borders with Syria and Jordan.

"Its consequences would be very dangerous for the Iraqi society and for the government," said Mohammed Bashar al-Faidi, a spokesman for the Sunni group believed to have links to insurgents.

Al-Maliki has said that his government was working on a plan to restore security to the provincial capital of Ramadi and that Iraqi forces would work with U.S. troops.

U.S. military spokesman Maj. Gen. William Caldwell said last week that American forces are "very concerned" about the situation in Ramadi because al Qaeda in Iraq is taking advantage of sectarian differences to make inroads in the city west of Baghdad. About 1,500 U.S. combat troops have been moved from Kuwait to Anbar province to help establish order.