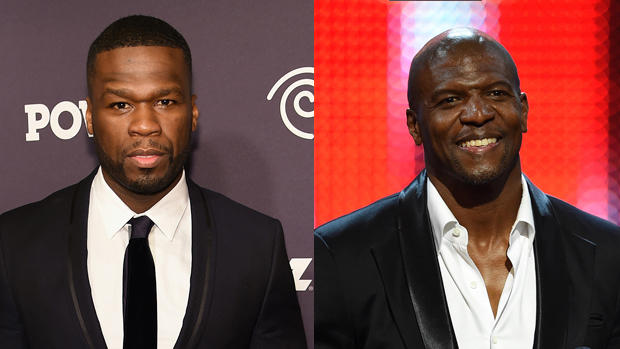 Rapper 50 Cent has deleted an Instagram post after making fun of Terry Crews for his activism as a sexual assault victim. The Instagram post showed Crews shirtless with the text, "I got raped. My wife just watched." It also showed another photo of Crews with a rose in his mouth with the caption "Gym time."

The post came after Crews testified before the Senate Judiciary Committee about how he was allegedly groped by a Hollywood agent. The actor said in his opening statement, "This past year we have seen powerful men in Hollywood and elsewhere finally held accountable for sexual assault. We also saw the backlash survivors faced coming forward. I wanted these survivors to know that I believed them, I supported them, and that this happened to me too."

He added, "I sit here before you just as an example, because a lot of people don't believe that a person like me could actually be victimized, and what happened to me has happened to many, many other men in Hollywood, and since I came forward with my story I've had thousands and thousands of men come to me and say, 'Me too -- this is my story.'"

But 50 Cent did not take Crews' testimony very seriously, instead writing in a caption to his Instagram post, "LOL, What the f**k is going on out here man? Terry: I froze in fear. they would have had to take me to jail. get the strap."

Crews recently told CBS News that he did not retaliate when WME agent Adam Venit allegedly groped him because he thought he would get arrested himself, saying, "I'm a 48-year-old big, giant, grown man and he's [a partner] at William Morris Endeavor and [if] I knock him out, am I getting mercy? I know how this story goes. 'This is America,' as Donald Glover says."

The backlash against 50 Cent's comments was swift, with social media users slamming him for "toxic masculinity." He later deleted the post.

Crews took the high road when TMZ approached him for comment. He told the site, "I love 50 Cent, I listen to his music while I'm working out. I prove that size doesn't matter when it comes to sexual assault."

Crews opened up about his accusations against Venit and explained why he decided to come forward.

"People were calling the women opportunists, gold-diggers, 'They just want a payday' or 'Why are they coming forward now?'" he said. "And I'm going, 'Anybody who's behind enemy lines needs to get to a safe spot.' I couldn't stand it. I had to lend my voice, because it happened to me, and people were saying, 'These women are crazy,' and I said I gotta lend my voice to this."

He also said that Russell Simmons, who has been accused by multiple women of sexual assault and rape, was one of the people who asked him to drop his case against Venit and WME. Crews says people at WME told him that what happened was no big deal and to "let it go."

"I was like, this is what women go through all the time," he said. "This is the gaslight."

The actor added that the key to healing is to overcome the feeling of shame.

"I tell people all the time, get rid of the shame," he said. "Don't hold it, because it's not yours. It's never yours."