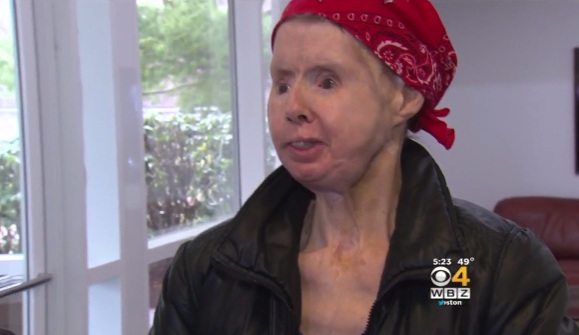 BOSTON -- A few years ago, Charla Nash didn't know if she would be alive today.

After she was attacked by an out-of-control chimpanzee in Connecticut, she came to Boston for a groundbreaking facial transplant operation at Brigham and Women's Hospital, CBS Boston reports.

Now five years after the attack she says the face transplant has given her new life.

"It's opened up the world to be out in the public and being part of the world again," she told CBS Boston.

With funding from the federal government, local doctors are studying how her body handles experimental treatments that could someday become standard for wounded soldiers needing transplants.

But Nash has learned the psychological toll is just as tough as the physical challenges.

"I used to be so independent and do everything myself," Nash said. "Now I have to wait for help and ask for help."

How does she get through it?

Recently, she won tickets to the Boston Flower and Garden Show from WBZ NewsRadio in Boston.

She's giving them to her nurse.

"When people do so much for you, you wish you could give back to everybody," she said.

Nash also dreams of life after the medical treatments, which she admits would ideally allow her to leave the very city that gave her life back.

"Maybe on a farm...nice small town where everybody knows everybody," she said.