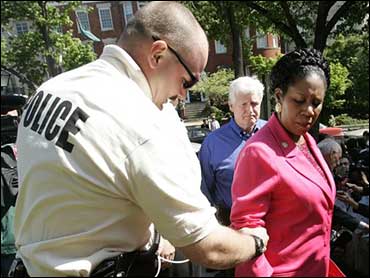 Five Congress members were arrested and led away from the Sudanese Embassy in plastic handcuffs Friday in protest of the Sudanese government's role in atrocities in the Darfur region.

"The slaughter of the people of Darfur must end," Rep. Tom Lantos, D-Calif., a Holocaust survivor who founded the Congressional Human Rights Caucus, said from the embassy steps before his arrest.

Four other Democratic Congress members — James McGovern and John Olver of Massachusetts, Sheila Jackson Lee of Texas and Jim Moran of Virginia — were among 11 protesters arrested on charges of disorderly conduct and unlawful assembly, a misdemeanor subject to a fine.

CBS News' Evelyn Thomas reports all five lawmakers were later released. Their trip to the embassy was coordinated by Rep. McGovern, who also plans on taking part in a rally against the Darfur violence that's scheduled at the National Mall on Sunday.