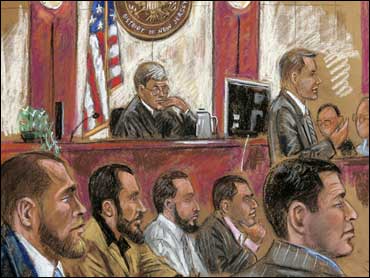 Five Muslim immigrants accused of scheming to massacre U.S. soldiers at Fort Dix were convicted of conspiracy Monday in a case that tested the FBI's post-Sept. 11 strategy of infiltrating and breaking up terrorist plots in their earliest stages.

The men could get life in prison when they are sentenced in April.

The five, who lived in and around Philadelphia for years, were found guilty of conspiring to kill U.S. military personnel. But they were acquitted of attempted murder, after prosecutors acknowledged the men were probably months away from an attack and did not necessarily have a specific plan. Four defendants were also convicted of weapons charges.

The federal jury deliberated for 38 hours over six days.

"I think the verdicts reflect both the strength and weakness of the government's case," said CBS News legal analyst Andrew Cohen. "Jurors believed clearly that the men were up to no good, and there was certainly some evidence to support that, but also that they didn't actually do enough to warrant a conviction on attempted murder."

The government said after the arrests in 2007 that case underscored the dangers of terrorist plots hatched on U.S. soil. Although investigators said the conspirators were inspired by Osama bin Laden, they were not accused of any ties to foreign terror groups.

Defense lawyers argued that the alleged plot was all talk — that the men weren't seriously planning anything and that they were manipulated and goaded by two paid FBI informants.

Faten Shnewer, the mother of defendant Mohamad Shnewer, said the informants should be the ones in jail. "Not my son and his friends. It's not right, it's not justice," she said after the verdict. The government "sent somebody to push him to say something; that's it."

"I don't think we'll see life sentences for any of these men. I think the judge will not go immediately to the high end of the sentencing range and of course how much time they serve also depends upon whether their appeals are successful," Cohen said.

The government said the men were targeting New Jersey's Fort Dix for an attack but had also conducted surveillance at New Jersey's Fort Monmouth, Dover Air Force Base in Delaware and other military installations, and had talked about assaulting some of those spots. The jury did not have to find that the men had any specific target in mind to convict them.

"These criminals had the capacity and had done preparations to do serious and grievous harm to members of our military," Ralph Marra, the acting U.S. attorney for New Jersey, said after the verdict.

But some Muslim leaders in New Jersey disputed that.

"I don't think they actually mean to do anything," said Mohamed Younes, president of the American Muslim Union. "I think they were acting stupid, like they thought the whole thing was a joke."

Jim Sues, executive director of the New Jersey chapter of the Council on American-Islamic Relations, said: "Many people in the Muslim community will see this as a case of entrapment. From what I saw, there was a significant role played by the government informant."

The yearlong investigation began after a clerk at a Circuit City store told the FBI that some customers had asked him to transfer onto DVD some video footage of them firing assault weapons and screaming about jihad.

The FBI asked two informants — both foreign-born men who entered the U.S. illegally and had criminal records — to befriend the suspects. Both informants were paid and were offered help obtaining legal resident status.

During the eight-week trial, the government relied heavily on information gathered by the informants, who secretly recorded hundreds of conversations.

Prosecutors said the men bought several assault rifles supplied by the FBI and that they trekked to Pennsylvania's Pocono Mountains to practice their shooting. The government also presented dozens of jihadist speeches and videos that the men supposedly used as inspiration.

According to prosecutors, the group chose Fort Dix because one of the defendants was familiar with it. His father's pizza shop delivered to the New Jersey base, which is 25 miles from Philadelphia and used primarily to train reservists for duty in Iraq.

The group's objective was to kill "as many American soldiers as possible," prosecutors said.

But the men's lawyers attacked the credibility of the informants and accused them of instigating the plot.

After the verdict, Schnewer's attorney, Rocco Cipparone, said there would not have been a conspiracy without the involvement of the informants. "I believe they shaped the evidence," he said.

Prosecutor William Fitzpatrick defended the government's handling of the case, telling the jury: "The FBI investigates crime on the front end. They don't want to have to do it on the back end."

Members of the jury would not speak to reporters after the verdict and instead released a statement that said, in part, "This has been one of the most difficult things that we have ever had to do."

None of the defendants testified.

The government said after the men's arrest that an attack was imminent, though prosecutors backed off that assertion at the trial.

"The men will be sentenced and we'll certainly see an appeal here by defense attorneys who argue that the government's witnesses exaggerated the threat posed by the men and then actually tried to nudge the men into illegal conduct," Cohen said. "This was not nearly the slam-dunk case that prosecutors claimed it was."

The government has had a mixed record on terrorism prosecutions since Sept. 11. It won guilty pleas from Sept. 11 conspirator Zacarias Moussaoui; Richard Reid, who tried to blow up a trans-Atlantic jetliner with a shoe bomb; and the Lackawanna Six, a terrorist cell outside Buffalo, N.Y. And it convicted Jose Padilla of plotting terrorist attacks.

But a case against four men in Michigan fell apart after a federal prosecutor was accused of withholding evidence. And a case in Miami against seven men accused of plotting to blow up Chicago's Sears Tower has produced one acquittal and two mistrials.