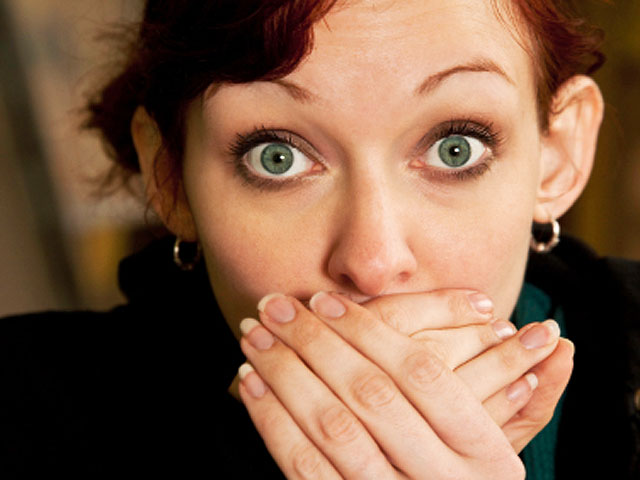 This story was updated on July 18, 2012, after we received new information about one of the sources

Despite best intentions, embarrassing things happen in the office. Recently, I read an OfficeTeam survey that included such mild mishaps as falling asleep while interviewing a candidate and coming to work with two different color shoes on. These results seemed pretty tame. Surely, there must be more titillating tales out there.

From my own informal survey, here are six embarrassing office tales that you surely won't be able to forget -- although the people involved in them might want to.

When are you due?
I arrived [early for an appointment] and the only people around were the receptionist and myself. We fell into conversation and she started telling me how much she hated her job. She was wearing this big flowing muu-muu dress that I took to be a maternity dress. To soothe her, I said, "Well, I guess you won't be here much longer." She said "Why not?," and I said I thought once the baby was born, she'd leave. In a very injured tone, she said, "I'm not pregnant" and I realized she wasn't; just enormously fat! --Miriam Silverberg, owner Miriam Silverberg Associates

What's that smell?
I was presenting during a sales pitch to a Fortune 50 company. We were working on a $1B+ deal.  I asked the group a provocative question that required a little thought. It was during that lull that the poor head of treasury for the prospect company tooted. It was loud. It was rancid. And then to make it worse he apologized. I'm sure there's a place in heaven for me because I worked through the remainder of the session locked away in that small room with my firm's senior execs, the prospect's senior execs, the treasury guy and his toot without making a fool of myself and rolling on the floor in hysterics. --Lorraine Romasco

Spell-check disaster
While working in the conservative field of high-end CPA reference material, I was sending an email to a large account client regarding an oversight on our part that delayed processing. I mangled the word 'inconvenience', but my email spellcheck caught it and offered a suggested fix. I clicked accept without double-checking. And I ended up sending the client an email saying that I "apologize for any incontinence." --Weldon Adams

Yep, that's my underwear
After missing a flight back to the office from upstate New York, my manager suggested that I take a helicopter back to the office in New York City. As I stood waiting my turn to enter the chopper, the draft from the blades completely lifted the bottom half of my dress up over my head. My face was covered with fabric and my entire back half was exposed to the four men waiting in line behind me. All I heard during that short ride back to New York were snickers! --Nancy Range Anderson, founder of Blackbird Learning Associates

Email implosion
I sent an email that didn't have tags to create line breaks in the email and it went out as one block of text. We needed to send a fixed version out and an apology, so my co-founder sent a test email to make sure that it was working. He meant to send it to just me, but he ended up sending it to the entire user base. Unfortunately, he has a sense of humor and the email said "This is my test email b-tches." We sent out a "We Really Screwed Up" apology...We ended up getting hundreds of emails, but the ironic thing was 99% of them were overwhelmingly supportive -- people just wanted to let us know that it made their day, or how happy they were to know it was real human beings and not corporate robots behind their service. --Alex Schiff, co-founder and CEO of Fetchnotes