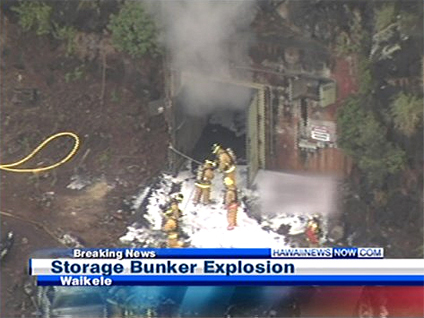 WAIKELE, Hawaii - Five people are dead following a fireworks explosion at a storage unit. Another man was injured but refused medical treatment.

CBS Affiliate KGMB is reporting that the Honolulu Fire Department initially responded to a car fire just before 9 a.m. Friday at the HIDC Small Business Storage Friday morning. But when crews arrived to the scene, they discovered fireworks exploding in the area.

According to Honolulu Police, six males were working at the bunker-style warehouses when the explosion occurred. Three men in their 20s and one man in his 50s were pronounced dead at the scene.

Another man taken to Straub Hospital in critical condition died Friday evening. He was identified as Bryan Cabalce.

KGMB reports family members of victims came to the scene of the tragedy in disbelief, while fire crews could do nothing but wait for the danger to subside before they could recover the bodies of two still inside the bunker.

One of the men killed was Justin Kelii, 29, of Kaneohe. His grandfather and aunt were among those who were given the terrible news at the entrance to the Waikele Business Center, where the bunkers are located.

"Very hard worker," Kelii's grandfather, George Kelii, said. "Very smart boy. I don't know how something like this could happen, especially one explosion while he's there, you know? I don't know."

According to Kelii's aunt, Deborah Dulatre, Kelii underwent training on the mainland to handle dangerous explosives.

Another victim was identified as Robert Leahey, 50, brother of sportscaster Jim Leahey.

Kelii, Leahey, Cabalce and the other unidentified victims were working for Donaldson Enterprises, a Hawaii-based company that specializes in finding and clearing unexploded ordnance. It had stored in the bunker illegal fireworks that were destined to be destroyed.

The bunker is more than 200 feet deep. The leaseholder said they are built to handle major explosions.

"It's all contained within the bunker," said Honolulu Fire Capt. Terry Seelig told KGMB. "So there's no hazard or danger to any of the community outside or surrounding."

Unfortunately, the heat within in the bunker periodically detonated more fireworks several hours after the explosion, making it too dangerous for fire department personnel to enter.

Seeling said fire and police crews will make an assessment Saturday morning to determine whether it is safe to enter the bunker.