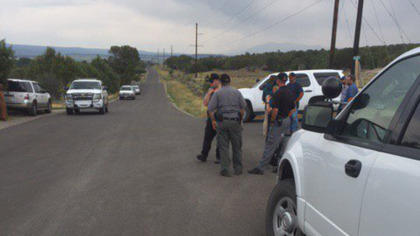 NORWOOD, Colo. -- A fifth suspect has surrendered to authorities after the child abuse deaths of two young girls whose bodies were found on a southwestern Colorado farm.

San Miguel County officials said four people were arrested Friday after the bodies of the girls were found on a farm outside Norwood, about 30 miles west of the ski resort town of Telluride.

Sheriff's spokeswoman Susan Lilly says investigators believe the girls — said to be between the ages of 5 and 10 — had been dead for at least two weeks.

The two men and three women who were arrested are being held on suspicion of fatal child abuse.

"In my 37 years as sheriff, I have never seen anything as cruel and heartless as this," San Miguel County Sheriff Bill Masters said in a statement.

CBS Denver identified the four other suspects as 23-year-old Frederick A. Blair of Norwood; 37-year-old Madani Ceus, of Haiti; 50-year-old Nathan Yah, of Haiti; and 53-year-old Ika Eden, of Jamaica. They have been initially charged with Felony Child Abuse Causing Death.