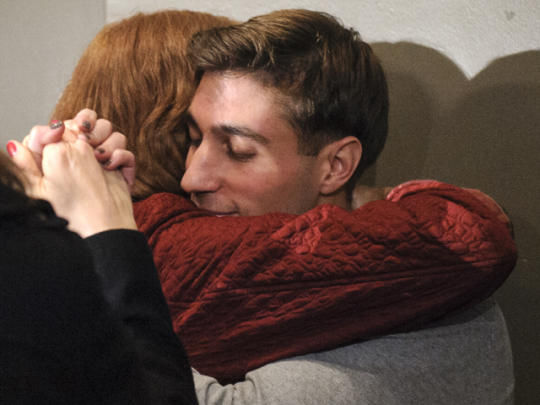 What an amazing year! After covering the case of Ryan Ferguson for more than eight years, reporting on appeal after appeal, who would have guessed that 2013 would be the year that the Western District Appellate Court in Missouri would agree to hear the case and overturn Ferguson's murder and robbery convictions?

Ferguson's release in November was all a reporter could ask for:  a "made for television" moment when Ferguson took the stage in a Columbia, Missouri hotel, alongside his family and attorney, Kathleen Zellner, and spoke so eloquently about how it  'takes an army' to get justice.

Today, Ferguson is in Florida, trying to catch up on the life he missed, but the case is not over.


Heitholt's murder can be solved. There isn't any physical evidence to tie Ferguson to the crime, but there IS evidence: a bloody palm print. A thumbprint. Bloody shoe prints. The police can determine who killed Heitholt, but will they?  How can authorities seriously re-investigate Heitholt's murder as long as Charles Erickson remains in prison for the crime?  The fact remains that none of the physical evidence matches Erickson either. The only thing that ties him to the murder is his confession, which he has recanted under oath.

Whenever my producer, Gail Zimmerman and I talk about Charles Erickson, she often begins with this one simple question: where were the adults when Erickson was first investigated?

He was a 19-year-old troubled drug and alcohol abuser in 2004 when police interrogated him about Heitholt's murder, more than two years after the crime. Raised as we all were to trust cops, he thought they would try to get to the bottom of things...look at the evidence and see if it matched him.  That didn't happen. Instead, the investigators made his story fit a crime they wanted badly to solve, telling him details that he appeared not to know.

And what about the Boone County District Attorney at the time, Kevin Crane?  Another adult who, according to the Appellate Court, was so determined to win his case that he concealed evidence from the defense.

And then there is Charles Erickson's own lawyer.  He saw the police video. He knew there was no physical evidence to tie either Erickson or Ryan Ferguson to the brutal murder.  Did he investigate thoroughly before he allowed his client to take a deal?

Where were the adults? And where are they now? Why aren't these responsible community leaders willing to take another look so that Kent Heitholt's killer can be found and prosecuted?

Those are the questions CBS News 48 Hours will pursue in the coming year. Maybe 2014 will be another amazing year for justice.