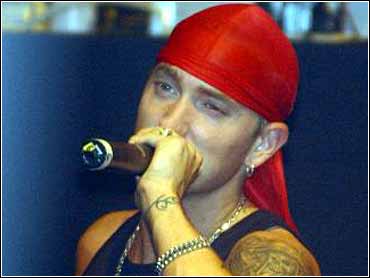 Police said 11 people were taken to local hospitals and released after treatment. The others were treated at first aid tents set up around the outdoor concert site.

Glasgow Police Chief Kevin Smith said there were no serious injuries, thanks to concert officials and the quick-thinking rap star: "We look to everybody to help, and one of the most helpful people involved was the act himself, Eminem."

Smith said Eminem calmed the crowd down, while security and first-aid officials waded into the crowd.

Eminem, who was asked by police to stay backstage until the injured people were removed from the crowd, was allowed to continued his show at Glasgow's "Gig in the Green" festival after a 30 minute break.

The two-day rock festival was targeted by protesters Saturday. Religious groups said they were protesting against what they called the "anti-Christian message" in shows by the Detroit rapper Eminem and Marilyn Manson.