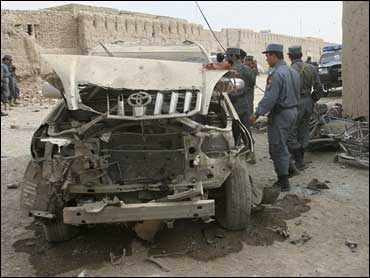 A roadside bomb killed four American soldiers in eastern Afghanistan on Sunday - new evidence of rising violence in a region where clashes and attacks in the first two months of 2009 more than doubled from the same period a year ago.

The spike in violence along the border is an early indication that roadside bombs and other ambushes are likely to surge as thousands of new U.S. forces arrive in Afghanistan this year.

Brig. Gen. Richard Blanchette, a spokesman for the NATO-led force here, confirmed that a roadside bomb killed four U.S. troops in eastern Afghanistan. A U.S. statement indicated the troops were based in Jalalabad.

A suicide bomber, meanwhile, attacked a NATO convoy in Kabul on Sunday but instead killed two passers-by - among 18 people killed Sunday, officials said.

Clashes and attacks in the eastern province of Kunar surged 131 percent in January and February from the same period in 2008, said Lt. Col. Rumi Nielson-Green, a U.S. spokeswoman.

Bomb and gunfire attacks are up in part because 700 10th Mountain Division soldiers were deployed to Kunar in early January, putting more soldiers in harm's way.

Kunar's rise in violence is likely indicative of what the 17,000 U.S. troops that President Barack Obama has ordered to Afghanistan will face later this year. Hoping to reverse Taliban gains, the troops will move into areas of the country where few other foreign or Afghan soldiers have held a long-term presence.

Many of those areas are likely to have conditions similar to Kunar, where "the enemy that has a traditional hold in the area are deeply entrenched with the population," Nielson-Green said.

"The population is also very xenophobic and are largely 'fence sitters,"' Afghans who have not pledged allegiance to either the government or the militants, she said.

The 10th Mountain troops moved into Kunar, near the porous Pakistan border, while the Pakistani military was conducting a six-month offensive against militants in its Bajur tribal area, which has been an important safe-haven for insurgents.

Bajur is a rumored hiding place for al Qaeda leader Osama bin Laden, and Pakistan's offensive there earned praise from American officials concerned that militants were using the area as a base from which to plan attacks in Afghanistan.

Last week, Pakistan signed a peace deal with the Mamund tribe after claiming victory in its fight. The tribe controls a large swath of Bajur and its ranks have yielded many Taliban leaders. The tribe, whose members straddle the Afghan-Pakistan border, has agreed to stop sheltering foreign fighters and hand over local Taliban leaders there.

But while Pakistan has seen success in Bajur, violence has more than doubled in Kunar across the border in Afghanistan.

Nielson-Green acknowledged that violence is rising in part because more fighters crossed the border to escape Pakistan's military offensive. But the main reason, she said, was the influx of U.S. troops.

Many of the recent attacks, she said, have been relatively ineffective mortar, rocket or machine gun assaults.

While Pakistan's operation in Bajur was successful, militants still "enjoy safe haven and support," in other tribal areas in Pakistan, Nielson-Green said.

Gen. Abdul Jalal Jalal, the Kunar provincial police chief, said he is concerned that ongoing peace talks between Pakistani Taliban and Pakistan's government may be used by the militants as a chance to cross the border and increase their attacks in Afghanistan.

The Taliban regularly use roadside bombs against Afghan and foreign troops. Last year the number of such attacks rose by 30 percent, according to NATO figures.

In the latest Afghan violence, a roadside bomb in eastern Afghanistan killed four American troops Sunday, NATO said. The U.S. Central Command confirmed that one of the four was a U.S. airman assigned to the 755th Air Expeditionary Group.

In another bomb attack, the mayor of Kandahar in southern Afghanistan survived a roadside bomb blast Sunday that killed a civilian and wounded two others, said Najibullah Khan, a police spokesman.

In eastern Afghanistan, a French soldier and five Afghan troops were killed during a clash with militants in Kapisa province, officials said.
By Associated Press Writer Fisnik Abrashi; AP Reporters Amir Shah in Kabul and Noor Khan in Kandahar contributed to this report