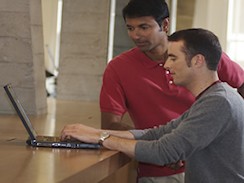 (MoneyWatch) The new version of Microsoft Office -- dubbed 2013 -- is headed for you like a freight train. Of course, many enterprises don't adopt new versions of Office right away, but smaller offices might end up with Office 2013 just as a result of purchasing new PCs. Why wait for the inevitable? You can preview Office right now by installing the Customer Preview.

First the good news: Office 2013 isn't a dramatic departure from Office 2010; there's no paradigm shift in this release like the abrupt shift from menus to the Ribbon like we saw back in 2007. So what can you expect to see in Office 2013? Here are some important elements to watch for:

A new, flat interface. Office 2013 is being readied in the shadow of Windows 8, so the Office team has to take that into consideration. The result: A new UI that's flat, simple, and -- to use Microsoft's language -- "modern." Let's be clear about this: Office is not a modern, Metro app. It won't run in the new full-screen Metro interface. It's a traditional desktop app, just like your existing version of Office. That means it'll run in Windows Vista and Windows 7 as well. But the look and feel of Office 2013 certainly gets its inspiration from the simple and flat presentation of Windows 8 modern apps.

Cloud enabled. Office is absolutely tied to the cloud, from the fact that all the document templates are located online to the tight integration of SkyDrive into the Open and Save experiences. Microsoft wants you to be logged into Office with your Windows Live ID, and that makes it easy to store your files in your spacious SkyDrive account.

Touch optimized. Office 2013, like Windows 8, is all about touch. That doesn't mean you can't still use a mouse and keyboard, of course, and mouse users won't really notice much difference. But if you do choose to grab one of those nifty Windows RT tablets, you'll find that Office 2013 makes it easy to tap, pinch, zoom and swipe.

Still fractured. I had hoped that after 20 years or so of Office, Microsoft might finally have made a real effort to ensure a seamless, consistent experience across the apps. Alas, each program remains its own kingdom, unbeholden to the strictures of uniformity or consistency. Word has a handy opening screen that lets you easily open your most recent documents, for example; the other Office apps don't.