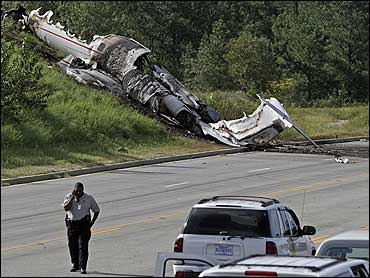 Officials said the plane carrying six people was departing shortly before midnight Friday when air traffic controllers reporting seeing sparks. The plane hurtled off the end of a runway and came to rest a quarter-mile (400 meters) away on an embankment across a five-lane highway, engulfed in flames.

Barker and DJ AM, whose real name is Adam Goldstein, were in critical but stable condition at a burn center in Augusta, Georgia, on Saturday afternoon, hospital spokeswoman Beth Frits said. Augusta is about 75 miles (120 kilometers) southwest of Columbia.

One witness said he was driving when a fireball streaked across the highway about 600 feet (180 meters) ahead of him. William Owns said he approached to see the two survivors frantically trying to remove their burning clothes.

"I noticed two guys who were on fire and it looked like a dance: They didn't know what to do," said Owens, a 60-year-old delivery van driver.

Goldstein had stripped off his own shirt and was helping Barker strip naked, said Owens, who was able to identify the men Saturday night because of news reports that showed Barker's extensive tattoos.

Owens said Goldstein told him four other people were on board the jet, but the flames were too intense to get close.

"'Oh my God' was all they were saying," Owens said of Barker and Goldstein. "They stood there and it's like - didn't know what to do. None of us did."

Two other passengers - Chris Baker, 29, and Charles Still, 25 - died, as did pilot Sarah Lemmon, 31, and co-pilot James Bland, 52, according to the county coroner. Baker was an assistant to Barker and Still was a security guard for the musician.

The plane was headed for Van Nuys, California. It is owned by Global Exec Aviation, a California-based charter company, and was certified to operate last year, Hersman said. The company expressed its condolences in a statement and said it was working with investigators to determine the cause of the crash.

"He was such an experienced pilot, it had to be something beyond their control," said Tim Ferrill, a Huntington Beach, California, pilot. "He was an absolutely meticulous pilot, very thorough and not a risk-taker at all."

At the crash site Saturday, the air was still heavy with the odor of jet fuel. A trail of black soot led off a runway. The nose of the aircraft was gone and the roof was missing from two-thirds of the charred plane.

National Transportation Safety Board member Debbie Hersman said officials recovered the cockpit voice recorder but had yet to analyze it or determine whether the recording was in good condition. She said the weather was clear when the plane took off, but said no factors had been ruled out.

"We're working as fast as we can to document all the evidence," Hersman said. "We have not yet found anything but we are looking at everything."

Barker and Goldstein had performed together under the name TRVSDJ-AM at a free concert in Columbia on Friday night. The show, which included performances by former Jane's Addiction singer Perry Farrell and singer Gavin DeGraw, drew about 10,000 people to a neighborhood near the University of South Carolina.

Barker, 32, was one of the more colorful members of the multiplatinum-selling punk rock band Blink-182, whose biggest album was 1999's CD "Enema of the State" and sold more than 5 million copies in the United States alone.

After Blink-182 disbanded in 2005, Barker went on to form the rock band (+44) - pronounced "plus forty-four." He also starred in the MTV reality series "Meet the Barkers" with his then-wife, former Miss USA Shanna Moakler. The show documented the former couple's lavish wedding and home life. Their later split, reconciliation and subsequent breakup made them tabloid favorites.

Goldstein, 35, is a popular DJ for hire who at one time was engaged to Nicole Richie and dated singer/actress Mandy Moore. While he became a gossip favorite for his romances, he draws respect from music aficionados for his DJ skills.

Barker and Goldstein performed as part of the house band at the MTV Video Music Awards earlier this month.