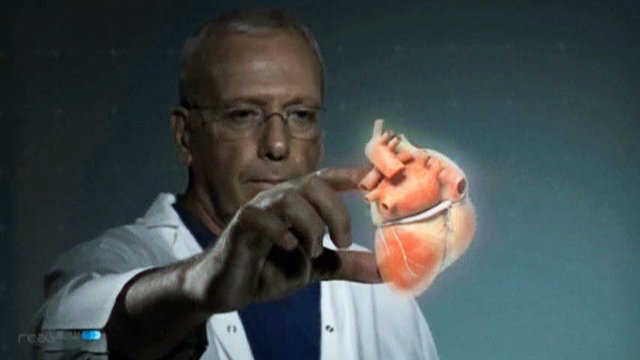 An Israeli company has developed a first of its kind 3D holographic technology it says, could pave the way to a new era of interventional medicine.

RealView Imaging LTD says it has recently completed a successful clinical study in which surgeons used live-action 3D holograms of their patients' beating heart to help them operate.

To illustrates the technology, the company has produced a video it says most accurately shows the system's capabilities. Developers say a live observer really would see a 3D hologram of a patient's beating heart or other organs floating in mid-air in real time. Images shot by conventional 2D cameras cannot convey the imagery as it would be seen by a surgeon.

"What that does is that gives you the patient's anatomy, the real patient's anatomy in a position where it's hyper realistic, you can see all of it, you can intuitively know where you are or what's going on inside that anatomy in real time. So you can use that to guide procedures, you can use that to understand better the anatomy that you want to deal with. So I think that because we deal with 3D patients, having their 3D imaging in 3D, or 4D because it works with real time, is a great advantage because we can see what's happening with the anatomy while we're doing the actual procedure," said Bruckheimer, who also serves as the head of cardiac catheterization at Schneider Children's Medical Center.

"Doctors deal with patients. Patients are built of tissues and things that move. If we want to intervene and treat those things, looking at them as they actually are in real life, in real time, is definitely going to improve the way we perform our procedures, how successful we are in those procedures and the time it takes to do those procedures. When I don't have to build it in my head from a couple of flat images, but I have the whole volume, then intuitively I can interact with the patient's anatomy. So I think the impact on clinical medicine in the wide diagnostic communication, understanding and intervening, that's where it's gonna be, you have the true patient's anatomy, and if it's a heart, beating in the palm of your hand," he added.

The results of the trial, the company said, were presented by Dr. Bruckheimer in October at the 25th annual Transcatheter Cardiovascular Therapeutics (TCT) scientific symposium in San Francisco, sponsored by the Cardiovascular Research Foundation.

The system operates by using data analysis and densed projection of light. Measurements and dimensions produced by x-rays, MRI or ultrasound images create the hologram and technology that uses light-scattering to project the image onto a fixed point in space does the rest, according to RealView president and co-founder Shaul Gelman.

"The system is involving two main aspects. One is computation, which receives 3D data sets and computes the hologram. And then after the computation of the hologram, the system has an electro-optical part that actually propagates this light into space and reconstructs the image in free air, allowing the user to go and interact with the image."

He added that unlike other 3D solutions, this technology does not necessitate special eye-wear and creates real images rather than illusions. It can be used for surgery or for periodic evaluation of a fetus during pregancny, much like a conventional ultrasound.

"Unlike typical 3D solutions that usually require eye-wear and create an illusion in space, in our case we don't use any eye-wear and optically this is not an illusion, meaning it really reconstructs points of light in free space that are in full colour. And since we are making these points densed enough it looks for the user as a smooth image that is appearing in free space and as I mentioned allowing him to better understand the image and work with the image by literally touching it," he said.

Doctor Einat Birk, head of the heart institute at Schneider Children's Medical Center who worked with the system, says the experience was "enlightening".

"It's very intuitive because we are all used to our three dimensional world and instead of having two dimensional cuts through the heart we are able to see the heart floating in front of us, we are able to cut through it, to touch it, to see the interaction between the device and the tissue around it. And it was really a wonderful, enlightening experience that we're never exposed to," she said.

RealView says it plans to launch its medical imaging system in 2015.