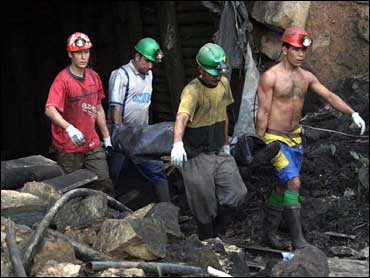 Efforts to remove the bodies trapped more than 1,300 feet underground by Saturday's blast were complicated by poor conditions and dangerous levels of trapped methane that made it impossible for work crews to remain below ground for extended periods.

But Fernando Rosales, director of civil defense in Norte de Santander state, said 30 bodies were recovered as of Sunday evening, and "there's one body remaining which crews will try to remove tomorrow."

Another miner escaped after the blast but later died at a hospital in the state capital of Cucuta, he said.

On Sunday, President Alvaro Uribe traveled to the mine in the remote hamlet of San Roque, 255 miles northeast of Bogota, and told family members gathered outside that he was "overcome with grief."

Uribe vowed the government would provide economic assistance to victims' families if the mine's owner had not contributed to employees' pension funds — a frequent labor violation in the poorly regulated mining sector. He also promised an investigation into whether the mine had passed recent safety inspections.

The explosion was likely caused by a buildup of methane inside one of the tunnels that was ignited by a spark, Rosales said. Many of the bodies were found badly burned and heavily bruised by falling rocks, he added.

Family members, who had rushed to the mine shortly after the Saturday morning explosion, had been relocated to the town of Sardinata 15 minutes away, where they were awaiting news about loved ones.

"We never imagined this was going to happen," Luis Octavio Acosta, the brother of two miners, told The Associated Press hours earlier before the fate of the trapped miners was known.

Many mines in this Andean nation are makeshift affairs with few or no safety procedures.

In January 2006, three self-employed coal miners — a 60-year-old father and his two sons — died at a mine in the same region after inhaling poisonous gases.

Other mine disasters in Colombia have been the result of landslides and erosion.

In 2001, at least 37 gold miners were killed when a hillside gave way and swept over them at a strip mine located 120 miles west of Bogota. The mine had been shut down earlier in the year because erosion made it unstable.