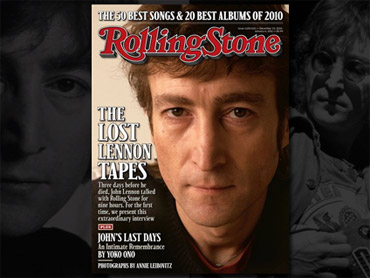 John Lennon's fans celebrated his life Wednesday by visiting Strawberry Fields, the Central Park garden dedicated in his honor, while a newly released interview he gave shortly before his death showed he was optimistic about his future.

On the 30th anniversary of Lennon's murder outside his Manhattan apartment building, admirers played his music nearby at Strawberry Fields and placed flowers on a mosaic named for his song "Imagine."

The steady stream of visitors represented the range of people who love Lennon, from those who watched his career unfold as it happened to those who know only his music.

"I grew up with his voice," said Marissa DeLuca.

"The Beatles are the soundtrack to my childhood," she said. "His voice is just kind of like home."

Her father said, "Nothing is timeless like the stuff John and Paul (McCartney) wrote."

Chris Carter, who hosts "Breakfast with the Beatles," a popular weekly radio program, stopped by "The Early Show" to share his reflections on Lennon.

"There's so many things we never got to hear from John," Carter said. "The possibilities were endless, you know those were all taken from us. And I think the loss, you know, we'll never be able to -- I don't think we can ever get that back, that feeling that you got from listening to John's music."

In Liverpool, where Lennon was from, hundreds were expected to gather for a vigil Wednesday around the Peace and Harmony sculpture, recently unveiled by Lennon's former wife, Cynthia, and their son Julian in Chavasse Park.

In the newly released interview, conducted just three days before he was gunned down, John Lennon complained about his critics - saying they were just interested in "dead heroes" and mused that he had "plenty of time" to accomplish some of his life goals.

The interview, his last, was released Wednesday to The Associated Press by Rolling Stone magazine, which uses the full interview for a story that will be on stands Friday. While brief excerpts of Jonathan Cott's interview were released for a 1980 Rolling Stone cover story days after Lennon's death, this is the first time the entire interview has been published.

"His words are totally joyous and vibrant and hopeful and subversive and fearless," Cott told the AP on Tuesday. "He didn't mince words."

Lennon saves some of his harshest words for critics who were perennially disappointed with his music and life choices after he left the Beatles.

"These critics with the illusions they've created about artists - it's like idol worship," he said. "They only like people when they're on their way up ... I cannot be on the way up again.

"What they want is dead heroes, like Sid Vicious and James Dean. I'm not interesting in being a dead (expletive) hero. ... So forget 'em, forget 'em."

He also predicted that Bruce Springsteen, then hailed as rock's bright future, would endure the same critical barbs: "And God help Bruce Springsteen when they decide he's no longer God. ... They'll turn on him, and I hope he survives it."

Lennon also talked about trying to be a good father to his youngest son, Sean, and learning how to relate to a child (he admitted he wasn't good at play). He also spoke of his strong bond with wife Yoko Ono: "I've selected to work with ... only two people: Paul McCartney and Yoko Ono. ... That ain't bad picking."

At 40, he was also reflective of what he had accomplished and remained committed to his goal of peace and love on earth.

That's what makes Lennon's music so relevant to so many people even after all these years, said David Thomas, 24, from Nyack, N.Y., who was braving the cold temperatures Wednesday to visit Strawberry Fields.

"It's so universal and simple, and it doesn't need to be overthought to be understood," he said.

The magazine also included an essay by Ono recalling her final days with her husband.

Ono released a statement Tuesday night in tribute to Lennon.

"On this tragic anniversary please join me in remembering John with deep love and respect," Ono said. "In his short lived life of 40 years, he has given so much to the world. The world was lucky to have known him. We still learn so much from him today. John, I love you!"