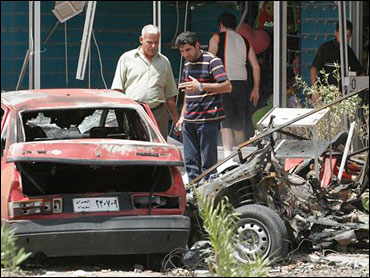 A roadside bomb killed three American soldiers and an interpreter north of Baghdad, the U.S. military said Wednesday, and Iraqi police reported 14 Shiite gunmen were arrested after fighting south of the capital.

American soldiers using specially trained dogs sifted through the wreckage Wednesday of an office in Sadr City where a bomb killed 10 people, including four Americans working to restore local government in the former Shiite militia stronghold.

Also Wednesday, U.S. soldiers in Baghdad killed three gunmen who fired on an American convoy that had stopped along the side of the road just west of the city's airport, the U.S. said. No further details were released.

Iraqi police said six members of a family were killed early Wednesday when a U.S. jet destroyed a house 10 miles north of Tikrit. U.S. officials made no mention of civilian deaths and said the house was attacked after American troops took small arms fire.

The roadside bombing that killed the Americans occurred about 10:45 p.m. Tuesday in Nineveh province, where al Qaeda in Iraq and other Sunni extremist groups remain active. The U.S. statement contained no further details.

Their deaths brought to at least 4,109 the number of U.S. military members who have died in the Iraq war since it began in March 2003, according to an Associated Press count.

At least 25 service members have died this month. May's death tally of 19 was the lowest monthly toll of the Iraq conflict.

The fighting in the south broke out before dawn near Nassiriyah, 200 miles south of Baghdad, as Iraqi forces were conducting house-to-house searches for Shiite militants.

The area is a stronghold of the Mahdi Army of anti-U.S. cleric Muqtada al-Sadr and has been plagued by power struggles between rival Shiite factions - some with close ties to the Shiite-led national government.

Internal Shiite rivalries may have been behind Tuesday's deadly blast inside the district council building in Sadr City, al-Sadr's Baghdad stronghold. The bomb went off inside a councilman's office ahead of an election to choose a new chairman of the council.

The acting head of the council, Jawad al-Itabi, said American investigators were searching the building Wednesday along with sniffer dogs looking for clues. He said 12 people were being detained for questioning, including 10 security guards.

Two of the U.S. dead were soldiers, the military said. The U.S. Embassy said the dead American civilians included one State Department and one Defense Department employee.

An Italian of Iraqi origin who was working as an interpreter for the Americans also was killed, according to the Italian Foreign Ministry.

The State Department identified one of the slain Americans as Steven L. Farley of Guthrie, Okla. He was believed to be the first member of a provincial reconstruction team to be killed in Iraq.

Farley's son, Brett, told The Associated Press on Tuesday that his father feared the situation could become dangerous after the council ousted a Sadrist member.

"It was today that they were scheduled to vote on electing a new chairman, a pro-democracy chairman, and he told me pointedly that it was the biggest moment that they had faced over there," Brett Farley said. "He fully understood what the risk was, but he was willing to bear it."

U.S. and Iraqi authorities offered differing versions of the airstrike near Tikrit. Iraqi police said a family of six, including four children, died in the attack.

The U.S. military said troops received small arms fire while conducting operations in the area. They called in an air strike after seeing an armed man move into a nearby group of buildings.

Four women were in the area but were turned over unharmed to Iraqi police, the U.S. military said. The differences could not be immediately reconciled.