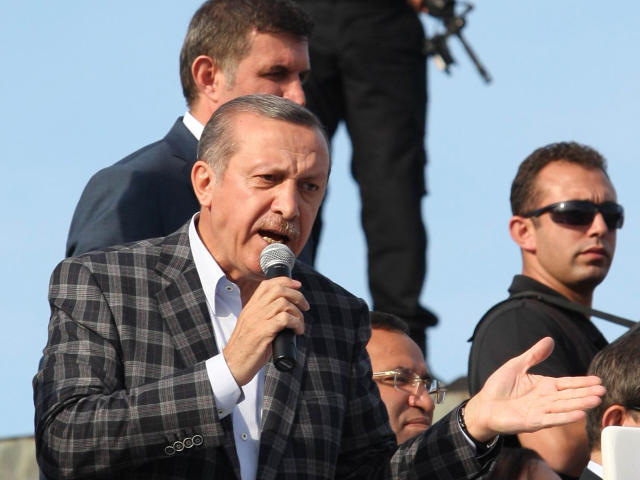 ANKARA, Turkey  - Three Cabinet ministers resigned in Turkey on Wednesday, days after their sons were taken into custody in a sweeping corruption and bribery scandal that has targeted Prime Minister Recep Tayyip Erdogan's allies and rattled the government.

The resignations include Economy Minister Zafer Caglayan, Interior Minister Muammer Guler and Erdogan Bayraktar, the environment and urban planning minister Erdogan Bayraktar - who also called on Erdogan to step down while announcing his resignation and exposing a deep rift with the Turkish leader.

All three ministers denied any wrongdoing.

Caglayan's and Guler's sons, along with the chief executive officer of the state-run bank Halkbank, are among 24 people arrested on bribery charges. Bayraktar's son, Abdullah Oguz, was detained as part of the probe but later released from custody.

Media reports said police seized $4.5 million in cash that was stashed in shoe boxes at the home of the bank's CEO, while more than 1 million dollars in cash was reportedly discovered in the home of Guler's son.

Erdogan has denounced the corruption probe as a plot by foreign and Turkish forces to thwart his country's growing prosperity and discredit his government ahead of local elections in March.

Critics accuse Erdogan of becoming increasingly authoritarian, but his government has won three elections since 2002 on the strength of the economy, a clean image and a promise to fight corruption.

The probe is one of the biggest political challenges Erdogan has faced since his Islamic-based party narrowly escaped being disbanded in 2008 for allegedly undermining Turkey's secular Constitution.

This summer, the government also weathered a wave of anti-government protests sparked by a development project that would have engulfed a beloved Istanbul park.

In a further headache for Erdogan, legislator Idris Naim Sahin - who Erdogan removed as interior minister in an earlier reshuffle - also announced his resignation from the party, while the Ankara prosecutor's office said a separate probe had been launched into alleged irregularities in the awarding of high-speed train contracts.

Turkish commentators believe the probe is fallout from an increasingly public feud and power struggle between Erdogan's government and an influential U.S.-based Muslim cleric, Fethullah Gulen, whose followers are believed to have a strong foothold within Turkey's police and judiciary. The two men, without naming each other, have been engaged in a war of words since the corruption probe was launched on Dec. 17.

Gulen has denied being involved in the investigation. He left Turkey in 1999 after being accused by the then-secular government of plotting to establish an Islamic state. He was later cleared of that charge and allowed to return to his homeland, but he never has and is living in Pennsylvania.

In an address to his party's provincial leaders, Erdogan distanced himself from the ministers who resigned by emphasizing his party's record and determination to fight corruption.  But he also repeated a claim that his government was the target of an international plot.

"There are media institutions, organizations and gangs in Turkey who think of others' interests rather than their own country's interests, and are working as spies in a treasonous manner," Erdogan said.

One newspaper, Sabah, pressed ahead with that allegation Wednesday by claiming that a U.S. diplomat had prodded a business group to join an "anti-government lobby."

That prompted a new rebuttal from the U.S. Embassy.

"Allegations targeting U.S. Embassy employees published in some media organs do not reflect the truth," the embassy said.

As he resigned Wednesday, Caglayan questioned the legitimacy of the investigation, which is focusing on alleged illicit money transfers to Iran and alleged bribery for construction projects.

"I am leaving my position at the Economy Ministry to spoil this ugly plot, which has involved my colleagues and my son (Salih Kaan), and to allow for the truth to be exposed."

In a telephone interview with NTV television, Bayraktar also denied any wrongdoing, complained of being pressured into resigning by Erdogan and insisted "a great proportion" of construction projects that are allegedly under investigation were approved by the prime minister himself.

"I want to express my belief that the esteemed prime minister should also resign," Bayraktar said.

Guler, the interior minister, told reporters Tuesday that he is the victim of a political plot and that there is nothing his family could not account for. He also said alleged wiretap recordings of a conversation with his son - reportedly used as evidence by police for the arrests- were tampered with, and that the cash discovered in his son's house was money earned from the sale of a luxury villa.

The opposition had long called for Caglayan and Guler to resign, claiming their sons were taking bribes on behalf of their fathers, and insisted they should not remain in positions where they were able to influence the probe.

The government already has dismissed dozens of police officials either involved in the investigation or thought to be linked to Gulen. Journalists have been barred from entering police buildings, fuelling accusations from critics that the government is trying to impede the probe.