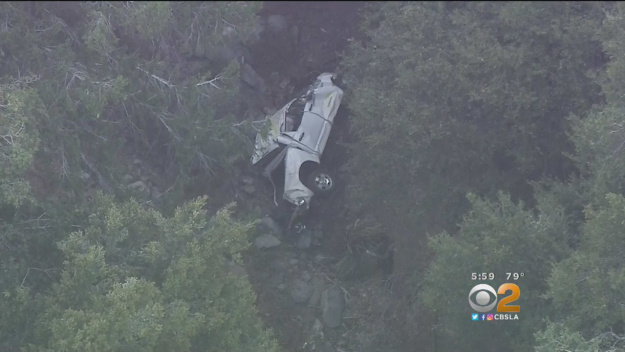 LA CANADA FLINTRIDGE, Calif. -- Three people were found dead Monday in the wreckage of a white pickup truck down a hill from a mountain highway north of Los Angeles. The discovery came in the same area where three teenagers who had been driving a white pickup had been headed when they were last seen on Saturday, authorities said.

Three people were declared dead at the scene off the Angeles Crest Highway about 15 miles north of Interstate 210 and La Canada Flintridge, the Los Angeles County Fire Department said. The severely damaged white pickup truck could be seen at the bottom of the hill.

But authorities have not yet released the identities of the bodies, said whether they might be the three teens, or provided any other details on the dead.

The three missing teenagers, all from Fontana about 50 miles to the east, had left on Saturday and told family members they were going hiking in the Angeles National Forest, possibly near Mt. Wilson, Fontana police said in a statement. They would have taken the Angeles Crest Highway to get to Mt. Wilson.

They left in Gamboa's truck, a white 2008 Toyota Tacoma pickup.

The last sign of them was the use of Gamboa's credit card shortly after 12 a.m. Sunday in Rancho Cucamonga, near Fontana.

"She was like my daughter. She's my sister but I practically raised her," Ornelas' sister Isabel told CBS Los Angeles. "She's such a smart girl. I mean, she should have not went in the [expletive] car. I knew it. I knew it."

One of Samantha's uncles said he recognized the truck and the emblem on the tailgate. Even so, some relatives were holding out hope.

"I think she's somewhere, crying for help," said a relative of Samantha's. "And I hope we find her."

Late Monday, as family members left the Fontana police station, they were too distraught to speak to reporters, telling police they are now accepting their loved ones are gone.