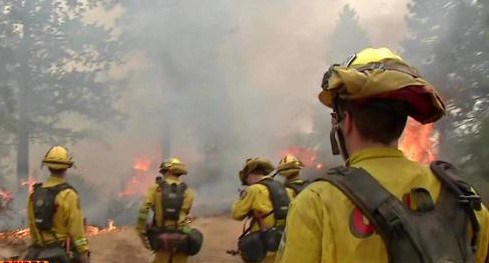 SAN FRANCISCO -- Three trapped firefighters had to deploy their personal fire shelters as a rapid wind shift sent a Northern California wildfire burning over their location Monday, authorities said. All three survived with no serious injuries.

The firefighters had created a predetermined safety zone earlier in the day and retreated there when the fire worsened about 5:30 p.m. Monday, Beaver Fire spokesman Corey Wilford said. Still, the flames burned over their location. A thunderstorm produced winds as high as 35 mph, causing extreme fire behavior.

Wilford said all firefighters in the area were withdrawing as the thunderstorm approached. All personnel were safe late Monday night, he said.

The three were not immediately identified. Wilford said he didn't know if they suffered any minor injuries.

The fire in Siskiyou County near Klamath River, California, has burned across nearly 40 square miles and was reported 30 percent contained.

The sheriff's office issued more mandatory evacuation notices Monday but Wilford did not immediately know how many homes were affected.

Meanwhile, crews were anticipating the possibility of more lightning strikes while battling a lightning-sparked wildfire in Mendocino County about 200 miles southwest of the Klamath blazes. The fire near Laytonville had burned through nearly 15 square miles and was threatening nearly 60 structures. Mandatory evacuation orders remained in place.

Elsewhere in the West, rescuers escorted to safety 19 hikers trapped on Sunday by a wildfire atop Saddle Mountain State Park near Seaside, Oregon.

And in Idaho, firefighters made progress against the state's largest wildfire, which had burned 101 square miles on the Idaho side of the Snake River near the Oregon and Washington border. The fire was nearly 50 percent contained, though crews were expecting triple-digit temperatures and gusty winds later in the week that could pose problems.