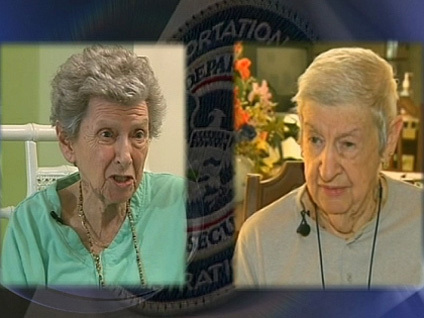 NEW YORK - A second elderly woman is alleging that TSA agents at a screening checkpoint at JFK Airport invaded her privacy.

Lenore Zimmerman, 85, told the New York Daily News that she was forced to undergo a strip search at Kennedy Airport last Tuesday - a report the TSA disputes.

On Monday a TSA official reiterated that no strip search of Zimmerman had been conducted, telling CBS News that the woman "did not undress other than removing the back brace. ... She did not remove anything further," and adding, "She did not remove her underwear."

Now 88-year-old Ruth Sherman spoke to CBS Station WCBS after hearing about Zimmerman's story, claiming to have had a similar ordeal at the same JetBlue terminal one day earlier.

Sherman, of Sunrise, Fla., was returning home from a Thanksgiving holiday in New York when TSA screeners wanted to check the bulge from Sherman's colostomy bag.

"You don't do that anybody," she added. "I felt like I was invaded."

Sherman said she initially complained to JetBlue and told her family, but is now going public.

Both she and Zimmerman said seniors are often too cooperative and afraid to speak up when humiliated.

WCBS contacted a TSA spokesman about Sherman's alleged strip search and were told that the TSA will research this new case.

The TSA released a statement Sunday, apologizing to Zimmerman but disputing her story.

TSA public affairs spokesperson Kristin Lee told CBS News that a review of closed circuit TV indicates that a "private screening was requested by the passenger, and was granted."

According to TSA sources, there was nothing unusual detected when Zimmerman and the security agents left the private screening area.

Lee told CBS News that "TSA screening procedures are conducted in a manner designed to treat all passengers with dignity, respect and courtesy and that occurred in this instance.

"While we regret that the passenger feels she had an unpleasant screening experience, TSA does not include strip searches as part of our security protocols, and one was not conducted in this case."

"I do want them to have some sort of consequence. I think the two agents that escorted or initiated the strip search should be terminated," he said.