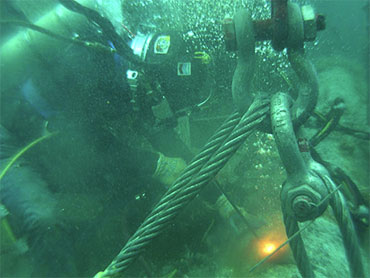 More than 27,000 abandoned oil and gas wells lurk in the hard rock beneath the Gulf of Mexico, an environmental minefield that has been ignored for decades. No one - not industry, not government - is checking to see if they are leaking, an Associated Press investigation shows.

The oldest of these wells were abandoned in the late 1940s, raising the prospect that many deteriorating sealing jobs are already failing.

The AP investigation uncovered particular concern with 3,500 of the neglected wells - those characterized in federal government records as "temporarily abandoned."

Regulations for temporarily abandoned wells require oil companies to present plans to reuse or permanently plug such wells within a year, but the AP found that the rule is routinely circumvented, and that more than 1,000 wells have lingered in that unfinished condition for more than a decade. About three-quarters of temporarily abandoned wells have been left in that status for more than a year, and many since the 1950s and 1960s - even though sealing procedures for temporary abandonment are not as stringent as those for permanent closures.

As a forceful reminder of the potential harm, the well beneath BP's Deepwater Horizon rig was being sealed with cement for temporary abandonment when it blew April 20, leading to one of the worst environmental disasters in the nation's history. BP alone has abandoned about 600 wells in the Gulf, according to government data.

There's ample reason for worry about all permanently and temporarily abandoned wells - history shows that at least on land, they often leak. Wells are sealed underwater much as they are on land. And wells on land and in water face similar risk of failure. Plus, records reviewed by the AP show that some offshore wells have failed.

Asked in multiple requests over several weeks how often abandoned wells have failed, the U.S. Environmental Protection Agency acknowledged Tuesday - as this story was being released - that it has had to deal with leaks at abandoned wells in shallow state waters of Louisiana and Texas. The U.S. Bureau of Ocean Energy Management, Regulation and Enforcement - which oversees wells in federal waters - also acknowledged Tuesday that it has dealt with "a few" failed abandoned wells farther out in the Gulf. But the information was released only through the public affairs offices and neither agency provided experts for follow-up.

Experts say abandoned wells can repressurize, much like a dormant volcano can awaken. And years of exposure to sea water and underground pressure can cause cementing and piping to corrode and weaken.

"You can have changing geological conditions where a well could be repressurized," said Andy Radford, a petroleum engineer for the American Petroleum Institute trade group.

Whether a well is permanently or temporarily abandoned, improperly applied or aging cement can crack or shrink, independent petroleum engineers say. "It ages, just like it does on buildings and highways," said Roger Anderson, a Columbia University petroleum geophysicist who has conducted research on commercial wells.

Despite the likelihood of leaks large and small, though, abandoned wells are typically not inspected by industry or government.

"It's in everybody's interest to do it right," said Bill Mintz, a spokesman for Apache Corp., which has at least 2,100 abandoned wells in the Gulf, according to government data.

Officials at the U.S. Interior Department, which oversees the agency that regulates federal leases in the Gulf and elsewhere, did not answer repeated questions regarding why there are no inspections of abandoned wells.

State officials estimate that tens of thousands are badly sealed, either because they predate strict regulation or because the operating companies violated rules. Texas alone has plugged more than 21,000 abandoned wells to control pollution, according to the state comptroller's office.

Offshore, but in state waters, California has resealed scores of its abandoned wells since the 1980s.

In deeper federal waters, though - despite the similarities in how such wells are constructed and how sealing procedures can fail - the official policy is out-of-sight, out-of-mind.

The U.S. Minerals Management Service - recently renamed the Bureau of Ocean Energy Management, Regulation and Enforcement - relies on rules that have few real teeth. Once an oil company says it will permanently abandon a well, it has one year to complete the job. MMS mandates that work plans be submitted and a report filed afterward.

Unlike California regulators, MMS doesn't typically inspect the job, instead relying on the paperwork.

The fact there are so many wells that have been classified for decades as temporarily abandoned suggests that paperwork can be shuffled at MMS without any real change beneath the water.

With its weak system of enforcement, MMS imposed fines in a relative handful of cases: just $440,000 on seven companies from 2003-2007 for improper plug-and-abandonment work.

Companies permanently abandon wells when they are no longer useful. Afterward, no one looks methodically for leaks, which can't easily be detected from the surface anyway. And no one in government or industry goes underwater to inspect, either.

Government regulators and industry officials say abandoned offshore wells are presumed to be properly plugged and are expected to last indefinitely without leaking. Only when pressed do these officials acknowledge the possibility of leaks.

Despite warnings of leaks, government and industry officials have never bothered to assess the extent of the problem, according to an extensive AP review of records and regulations.

That means no one really knows how many abandoned wells are leaking - or how badly.

The AP documented an extensive history of warnings about environmental dangers related to abandoned wells:

- The General Accountability Office, which investigates for Congress, warned as early as 1994 that leaks from offshore abandoned wells could cause an "environmental disaster," killing fish, shellfish, mammals and plants. In a lengthy report, GAO pressed for inspections of abandonment jobs, but nothing came of the recommendation.

- A 2006 Environmental Protection Agency report took notice of the overall issue regarding wells on land: "Historically, well abandonment and plugging have generally not been properly planned, designed and executed." State officials say many leaks come from wells abandoned in recent decades, when rules supposedly dictated plugging procedures. And repairs are so routine that terms have been coined to describe the work: "replugging" or the "re-abandonment."

- A GAO report in 1989 provided a foreboding prognosis about the health of the country's inland oil and gas wells. The watchdog agency quoted EPA data estimating that up to 17 percent of the nation's wells on land had been improperly plugged. If that percentage applies to offshore wells, there could be 4,600 badly plugged wells in the Gulf of Mexico alone.

- According to a 2001 study commissioned by MMS, agency officials were "concerned that some abandoned oil wells in the Gulf may be leaking crude oil." But nothing came of that warning either.

The study targeted a well 20 miles off Louisiana that had been reported leaking five years after it was plugged and abandoned. The researchers tried unsuccessfully to use satellite radar images to locate the leak.

But John Amos, the geologist who wrote the study, told AP that MMS withheld critical information that could have helped verify if he had pinpointed the problem. "I kind of suspected that this was a project almost designed to fail," Amos said. He said the agency refused to tell him "how big and widespread a problem" they were dealing with in the Gulf.

Amos is now director of SkyTruth, a nonprofit group that uses satellite imagery to detect environmental problems. He still believes that technology could work on abandoned wells.

MMS, though, hasn't followed up on the work. And Interior Department spokeswoman Kendra Barkoff said agency inspectors would be present for permanent plugging jobs "only when something unusual is expected." She also said inspectors would check later "only if there's a noted leak."

Companies may be tempted to skimp on sealing jobs, which are expensive and slow offshore. It would cost the industry at least $3 billion to permanently plug the 10,500 now-active wells and the 3,500 temporarily abandoned ones in the Gulf, according to an AP analysis of MMS data.

The AP analysis indicates that more than half of the 50,000 wells ever drilled on federal leases beneath the Gulf have now been abandoned. Some 23,500 are permanently sealed. Another 12,500 wells are plugged on one branch while being allowed to remain active in a different branch.

Petroleum engineers say abandoned offshore wells can fail from faulty work, age and drilling-induced or natural changes below the seabed. Maurice Dusseault, a geologist at the University of Waterloo in Ontario, Canada, says U.S. regulators "assume that once a well is sealed, they're safe - but that's not always the case."

Even fully depleted wells can flow again because of fluid or gas injections to stimulate nearby wells or from pressure exerted by underlying aquifers.

Permanently abandoned wells are corked with cement plugs up to 200 feet (60 meters) long. They are placed in targeted zones to block the flow of oil or gas. Heavy drilling fluid is added. Offshore, the piping is cut off 15 feet below the sea floor.

Wells are abandoned temporarily for a variety of reasons. The company may be re-evaluating a well's potential or developing a plan to overcome a drilling problem or damage from a storm. Some owners temporarily abandon wells to await a rise in oil prices.

Since companies may put a temporarily abandoned well back into service, such holes typically will be sealed with fewer plugs, less testing and a metal cap to stop corrosion from sea water.

In the Deepwater Horizon blowout, investigators believe the cement may have failed, perhaps never correctly setting deep within the well. Sometimes gas bubbles form as cement hardens, providing an unwanted path for oil or gas to burst through the well and reach the surface.

The other key part of an abandoned well - the steel pipe liner known as casing - can also rust through over time.

MMS personnel do sometimes spot smaller oily patches on the Gulf during flyovers. Operators are also supposed to report any oil sheens they encounter. Typically, though, MMS learns of a leak only when someone spots it by chance.

In the end, the Coast Guard's Marine Safety Laboratory handles little more than 200 cases of oil pollution each year.

And manager Wayne Gronlund says it's often impossible to tell leaking wells from natural seeps, where untold thousands of barrels of oil and untold millions of cubic feet of gas escape annually through cracks that permeate the sea floor.