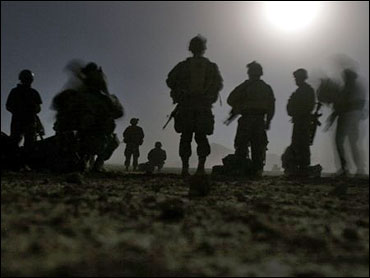 Coalition and Afghan forces killed 26 suspected militants Wednesday in fighting in eastern mountains, while in southern Afghanistan, more than 11,000 troops prepared for their biggest offensive since the fall of the Taliban five years ago.

About 100 British troops were quickly air-dropped in to support the patrol and coalition air fire killed or wounded 12 militants in the area, said coalition spokesman Maj. Quentin Innis. Another coalition soldier died in combat in the eastern Kunar region.

Four civilians were also killed when a rocket hit their home in a separate rebel attack in Paktika, Khelwak said.

The major offensive that starts Thursday will involve 11,000 U.S., British, Canadian and Afghan troops. The push, which aims to squeeze Taliban fighters in four volatile provinces, will focus on southern Uruzgan and northeastern Helmand, where the military says most of the forces are massed.

"This is not just about killing or capturing extremists," U.S. spokesman Col. Tom Collins told reporters in Kabul as he announced the operation.

"We are going to go into these areas, take out the security threat and establish conditions where government forces, government institutions, humanitarian organizations can move into these areas and begin the real work that needs to be done."

The force of more than 11,000 troops is the largest deployed in Afghanistan for one operation since the 2001 invasion. Previous offensives have involved several thousand soldiers.

U.S. troops on Wednesday built walls of sand and guard outposts around the small forward operating base that will support the operation.

"Right now ... they'll be in one area, they'll move out of that area, they'll conduct an attack in another area, then move back to a safe haven," he said last week in an interview at Bagram, the U.S. military headquarters north of Kabul.

"This is our approach to put simultaneous pressure on the enemy's networks, to cause their leaders to make mistakes, and to attack those leaders," Freakley told the AP ahead of the operation.

The offensive began May 15 with attacks on Taliban command and control and support networks. According to U.S. military and Afghan figures, about 550 people, mostly militants, have been killed since mid-May in the fiercest fighting since the Taliban's ouster. At least nine coalition troops have been killed in combat during the same time.

That fighting included up to 200 Taliban rebels attacking Musa Qala before fleeing from hundreds of coalition and Afghan forces.

Conditions permitting, Thursday will mark what the military calls the start of major and decisive anti-Taliban operations lasting through the summer. Reconstruction projects also play a major role.

Some American forces will rotate out once the operation finishes at the end of the summer, while the British and Canadians will remain.

The offensive, which the military has been planning for 18 months, coincides with a surge in militant attacks in the southern and eastern provinces near the Pakistani border, where Afghan authorities have little or no presence.

Another major offensive, involving 2,500 U.S. and Afghan troops, was launched in April in eastern Kunar province and its reconstruction phase is continuing, Freakley said. But the Taliban is the strongest in the south.

Since the Taliban regime's defeat in late 2001, the militants have gained strength, said another military spokesman, Lt. Col. Paul Fitzpatrick. "I think this summer the Taliban is stronger than they've been in years."

Some of the increased fighting can be attributed to many more troops now being in the south.

"A year ago there was one infantry company in Helmand. Now there (are) 3,300 British," Freakley said. "The enemy was doing whatever they wanted. Now we're going into areas we haven't been in before, and now there's a backlash."

Just north, the Hazara people — a rival tribe to the ethnic Pashtuns, from which the Taliban draws its fighters — will provide a "tribal backstop" for the coalition, he said.

Another goal is to set the conditions for NATO's International Security Assistance Force, which takes command in Afghanistan from the U.S.-led coalition in late July or early August. The NATO force will have 6,000 troops stationed permanently in the south, double what the coalition has had in recent years.