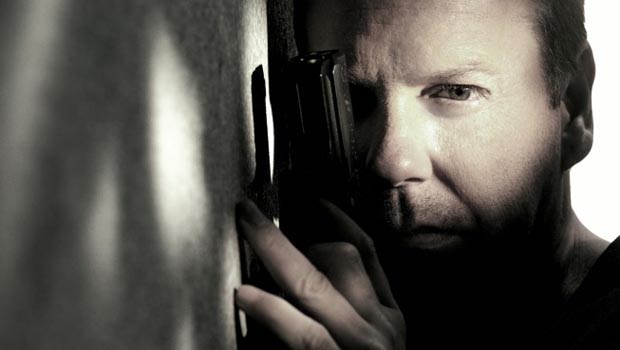 Jack Bauer is back, and he's on the run in London.

Kiefer Sutherland returns as the intrepid counter-terrorist in a 12-episode run of "24: Live Another Day," debuting with a two-hour show May 5 on Fox. It will take up its regular one-hour slot starting May 12.

"I'm about as anxious and wound up as I've been in a long time," Sutherland said Monday at the Television Critics Association winter meeting.

"There's a great impetus for all of us to create something new with the show," Sutherland said.

The show will be set and shot in London and retain the real-time format with split screens and interwoven story lines. It picks up four years after the events of "24's" final season, with Bauer now a fugitive being hunted by the CIA.

"Things will be blowing up -- cars, double decker buses, things like that," said Sutherland, who was born in London. "I'm sure we'll be hated by a large portion of London for snarling up their traffic here and there, and for that I apologize in advance."

Also back from the original series are Mary Lynn Rajskub, Kim Raver and William Devane. Several newcomers have joined the cast, including Oscar nominee Judy Davis and Yvonne Strahovski of "Dexter."

Rajskub, who plays Chloe, said she closely followed Internet speculation about the series return and waited eagerly to find out whether she'd be included.

"I have a lot of people who refuse to call me anyone but Chloe," she said. "I never thought '24' would come back and in this format."

A potential "24" movie has been bandied about, too.

"If this ends up rebooting the show or causing a film to be made, so be it," Sutherland said, adding any script for a movie version would be "very, very different."

"The film is sort of an ongoing situation," he said.