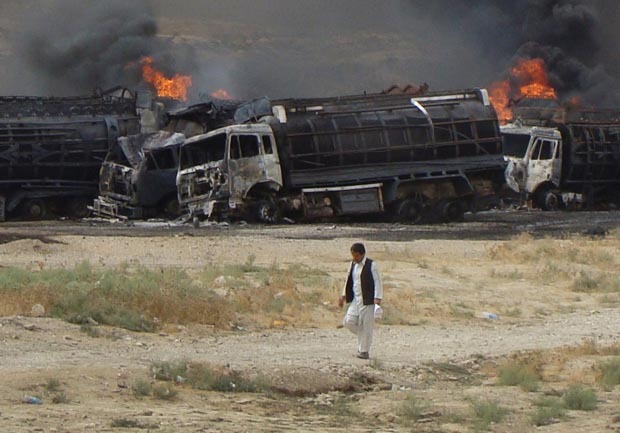 (AP) KABUL, Afghanistan - The Taliban detonated a bomb on a fuel tanker Wednesday and then opened fire on other NATO supply trucks, destroying 22 vehicles loaded with fuel and other goods for U.S.-led coalition forces in Afghanistan.

Elsewhere in the country, a suicide bomber killed three Afghan soldiers at a checkpoint in the east, while militants killed nine more government troops in an ambush in the south. Three NATO service members were also killed in insurgent attacks.

The violence comes as Afghan forces are taking charge of security in more areas across the country ahead of the planned withdrawal of the U.S.-led coalition's combat forces by the end of 2014. To show they remain a resilient force, insurgents are conducting targeted attacks, even in relatively peaceful parts of the country.

One of the places is Samangan province in the north, where the Taliban said they attacked NATO supply trucks parked overnight in the Rabatak area.

"We put explosives on a fuel tanker. When it exploded, we fired on the trucks," Taliban spokesman Zabiullah Mujahid told The Associated Press by telephone.

Sidiq Azizi, a spokesman for the province, said many tankers and semi-trailers caught fire after the bomb went off around 2 a.m.

Hours later, plumes of thick black smoke still billowed from the area, and firefighters were spraying water on the burning vehicles.

"There was a big boom," Azizi said. "It's possible that is was a magnetic bomb from insurgents. We are investigating."

"I counted 20 fuel tankers burning. There is still a very big fire," said Azizi, who was at the scene. "The weather is very hot and it's hard to get close to the fire."

The tankers in the convoy were transporting fuel south toward the Afghan capital, Kabul, from neighboring Uzbekistan to the north.

Convoy traffic in the east has increased since Pakistan reopened its border crossings about two weeks ago. Islamabad blocked NATO supply trucks for seven months in retaliation for U.S. airstrikes that killed 24 Pakistani soldiers.

In the suicide blast in the east, a man wearing an Afghan army uniform blew himself up at a checkpoint in Logar province, killing three Afghan troops, said provincial spokesman Din Mohammad Darwesh. The Taliban issued a statement claiming responsibility for the attack in Baraki Barak district. Two other Afghan soldiers and a translator were wounded.

Insurgents are trying to regain territory they lost during the past two years when tens of thousands of U.S., NATO and Afghan forces routed them from their strongholds in the south.

NATO said two service members were killed in a roadside bombing Wednesday in the east, while another died Tuesday in an insurgent attack in the south. So far this year, 240 coalition service members have been killed in Afghanistan, including at least 172 Americans.

Also Wednesday, NATO also said a coalition helicopter crashed in the west, injuring two other service members. No other information has been released about the crash, which is under investigation.