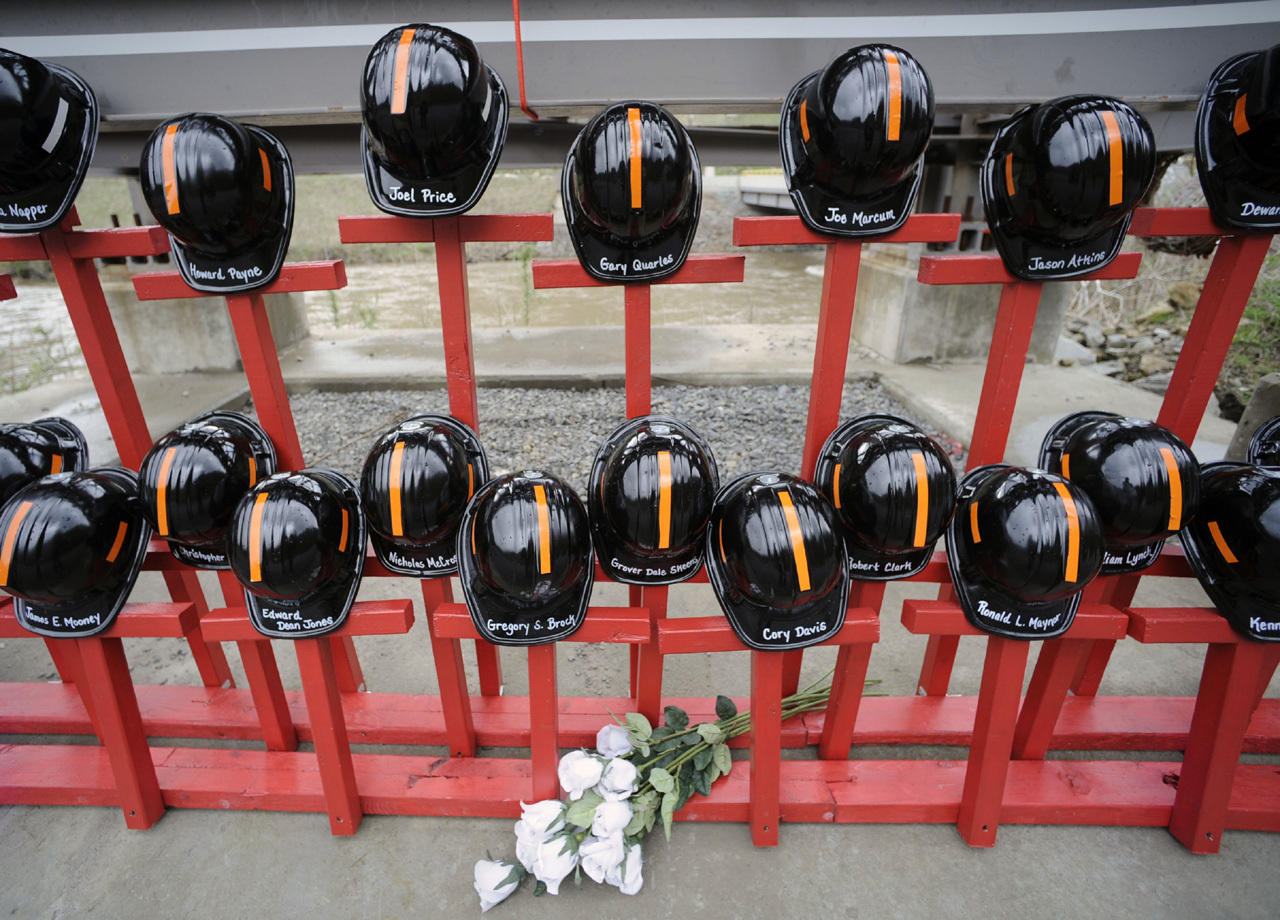 CHARLESTON, W.Va. (AP) — The West Virginia coal mine blast that killed 29 men has yielded a wide-ranging and historic $210 million settlement proposal to compensate victims' families, pay fines and improve underground safety in response to the worst U.S. coal mining disaster in decades, an attorney with knowledge of the settlement told The Associated Press on Tuesday.

The agreement between federal authorities and the new owners of the Upper Big Branch mine includes $46.5 million in criminal restitution to the miners' families, $128 million to fund cutting-edge mine safety upgrades, research and training, and $35 million in penalties for federal mine safety violations. It also does not prevent the future prosecutions of individuals on criminal charges in the April 2010 blast.

The person was not authorized to talk about the details before an official announcement and asked for anonymity. U.S. Attorney Booth Goodwin, of West Virginia's southern federal court district, has scheduled a Tuesday morning press conference at the Robert C. Byrd U.S. Courthouse in Charleston.

The U.S. Mine Safety and Health Administration, meanwhile, expected to brief the victims' families and then the media Tuesday on its final report from the disaster. Federal investigators have previously blamed the Raleigh County blast on a combination of methane gas, coal dust and broken or malfunctioning equipment in the underground mine.

Massey Energy Co. operated Upper Big Branch through a subsidiary at the time of the explosion. The Virginia-based Massey has since been acquired by rival Alpha Natural Resources, which reached the sweeping agreement with federal officials.

Alpha has agreed to pay $35 million for all citations against Massey's former mines, including $10.8 million in violations that MSHA will announce in Tuesday's investigative report.

The $46.5 million in criminal restitution aims to guarantee that the families of the 29 miners and two co-workers who survived the explosion each receive $1.5 million. Several families have already received this portion of the agreement, by settling with Massey in the months following the disaster.

For the families, the deal is about half of what Massey initially offered. Within a month of the blast, the daughter of one dead miner told The Associated Press that Massey was offering $3 million to each of the families. Michelle McKinney, daughter of Benny Ray Willingham, said the offers came in personal visits, but she wasn't interested in settling because her father's life had no price tag.

Before she went into a briefing on the settlement Tuesday morning, one victim's mother was furious about word that a deal had been struck.

"I have no intentions of settling with these people that have killed my son," said Patty Quarles, whose son Gary Wayne was among the victims. "They need to be put in jail."

The Virginia-based Alpha will also invest $48 million in a mine, health and safety research trust, and another $80 million to improve safety at all of its underground mines with the latest technology and equipment. The upgrades include sufficient workers and gear to coat mines with crushed limestone to dilute the explosive coal dust that accumulates during mining.

These investments will also fund a state-of-the-art training center in southern West Virginia that will host a laboratory capable of testing safety conditions in ways that would be too dangerous to attempt in actual mines.

Alpha has also agreed to audit all of its underground mines, correct any shortcomings found within 90 days and report those results to federal officials. The company must similarly share the findings of its internal investigation into the disaster.

The agreement appears to be among the largest resulting from a U.S. mining disaster. The settlement is sizable by Massey standards. In 2009, Massey and subsidiary Aracoma Coal Co. agreed to pay $4.2 million in criminal fines and civil penalties related to a January 2006 fire that killed two miners at the Alma No. 1 mine.

Don Bragg and Ellery Elvis Hatfield died after getting lost as they tried to flee the sprawling underground Logan County mine. Their widows had settled a wrongful death lawsuit for undisclosed terms in 2008. Four mine supervisors later pleaded guilty to federal misdemeanor charges that they failed to lead crews on required escape drills at various times in 2005 and 2006.

"Somebody's got to pay for what's been done," he told The Associated Press late Monday.

Quarles, a miner for nearly 40 years and a former Massey employee, had been inside Upper Big Branch and knew that his son faced bad conditions every day he went to work. But in the eight months since the blast, previous MSHA briefings and comprehensive reports by independent investigators and the United Mine Workers of America have revealed "it was worse than what we thought — a lot worse," he said.

The United Mine Workers of America, the nation's largest coal miners' union, said last month that conditions were so dangerous that Massey executives and managers should be prosecuted for "industrial homicide."

MSHA's final report is likely to include a list of specific violations that contributed, but the agency also refused to comment on the report before its official release. Nor would officials there answer questions about the settlement.

Alpha, which bought Massey and Upper Big Branch in June, has said it's still reviewing the explosion but hasn't indicated whether or when it might issue a report. The state mine safety office, meanwhile, expects to complete its report by the end of January.

But all the reports so far agree on the mechanics of what happened: Poorly maintained machines cutting into sandstone created a spark that ignited both a small amount of naturally occurring methane gas and a massive accumulation of explosive coal dust. Malfunctioning water sprayers allowed what could have been a small flare-up to become an epic blast that traveled seven miles of underground corridors, doubling back on itself and killing men instantly.

All three also say the explosion could have been prevented or contained. Had the mine been sufficiently dusted with pulverized limestone to render the coal dust inert, the spark wouldn't have had the fuel to propagate.