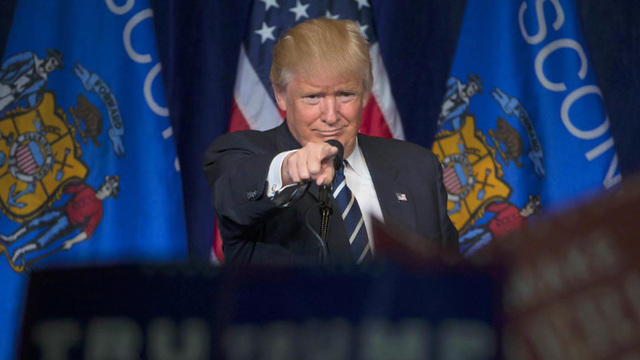 That vote could help put states like Michigan and Wisconsin, where they may be trailing, back in play. So Trump is looking for votes everywhere – even in Hillary Clinton’s column, reports CBS News correspondent Major Garrett.

“This is a message for any Democratic voter who have already cast ... for Hillary Clinton and who are having a bad case of buyer’s remorse,” Trump told the crowd.

For the first time, Trump delivered what he called a “public service announcement” for early voters in certain states.

Nationally, more than 27 million early and absentee ballots have already been cast more than half the 2012 total. That includes more than 500,000 in Wisconsin, and 250,000 in Minnesota.

“Senator Ron Johnson, I hope you are all going to get out and vote for Ron,” Trump said.

“In fact, I already voted here in Janesville for our nominee last week in early voting,” Ryan said during an appearance on “Fox and Friends.”

Still estranged from Trump, Ryan avoided saying his name and won’t campaign for him.

“I’ve already got a long schedule that has been long in place, fighting for House Republicans and also Senate Republicans because that’s what the speaker of the House does,” Ryan said.

“We will be able to immediately repeal and replace Obamacare. Have to do it,” Trump said.

Trump has received only a handful of newspaper endorsements, but got a potentially unwelcome one Tuesday. The official newspaper of the KKK, “The Crusader,” put Trump on its cover Tuesday below the headline, “Make America Great Again.”