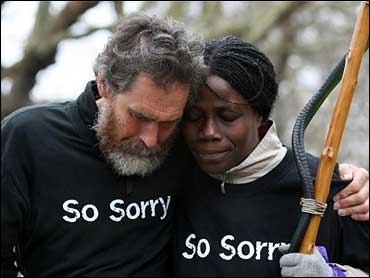 Ceremonies on both sides of the Atlantic have marked the 200-year anniversary of the day the British parliament passed a law banning the trade of human beings. But, two centuries later, there is still resentment, and governments of all sizes are still trying to step out from the dark shadow of slavery.

In 1672, the Royal Africa Company was founded in London, firmly basing the trade of slaves from Africa in Britain. Thousands of ships, burdened with their stock of chained men, women and children, would sail from west Africa, via England, to the New World. Millions died before the trade was abolished.

Enacted on March 25, 1807, the Slave Trade Act prohibited British ships from transporting slaves, although Britain did not abolish slavery in its territories until 1833.

People across the Caribbean bowed their heads for a moment of silence Monday to mark the end of the trans-Atlantic slave routes, which shaped the region's history.

In Jamaica, islanders held symbolic funeral rites in Kingston Harbour for African slaves who died during the perilous ocean crossing.

In Dominica, the cries of African slaves being led to cell blocks pierced the air as their lives were re-enacted.

Participants walked in chains to Roseau's Baraccoon building, where slaves were held before being auctioned off to plantation owners in the former French and British colony, and which now houses the City Council.

In Guyana, a tribute was held in the compound of parliament buildings where slaves were beaten and sometimes hanged.

"We unite as a region and as a people, in a collective moment of reflection, as we remember one of the greatest tragedies in the history of humanity, which denied over 25 million Africans, for over 400 years, the basic human right of freedom, the right to self actualization and for so many, denial of even their basic right to life," said Ralph Gonsalves, prime minister of St. Vincent and the Grenadines and chairman of the Caribbean Community.

The majority of the African slaves taken from their homeland were destined for lives of servitude in America, most on the plantations of the south.

Ports in some eastern states served as unloading points for the ships from Britain. Auction blocks were set up, and white property owners tried to outbid each other for people whose lives had been assigned little more value than that of farm animals.

Little doubt can exist over the symbolic timing of the Maryland legislature's vote on Monday to formally apologize for the state's role in the slave trade, expressing "profound regret" that the state once "trafficked in human flesh."

The Maryland resolution notes that slavery "fostered a climate of oppression not only for slaves and their descendants but also for people of color who moved to Maryland subsequent to slavery's abolition."

Democratic State Sen. Nathaniel Exum, a sponsor of the resolution, said he felt exhilarated that Maryland lawmakers had finally decided recognize the painful role the state played in slavery's past.

"Once we come to that recognition, maybe we will also recognize steps we need to do to get rid of the lingering effects of it on the people," Exum said Monday.

Back in the home of the slave trade, British Prime Minister Tony Blair marked the anniversary with a pre-recorded address. "This is a very special day. Two-hundred years ago the British parliament legislated to end the slave trade across the British Empire. The vote in our parliament began the long process of ending the trans-Atlantic slave trade, one of the most shameful enterprises in history," he said in the video.

Blair has previously said he's sorry for Britain's prominent involvement in the slave trade and expressed "deep sorrow," but the second-ranking cleric in the Church of England is urging the prime minister to go further.

Archbishop of York John Sentamu has called on Blair to issue a formal apology for Britain's role in slavery.

For others, a formal apology wouldn't go far enough. There are groups in both Britain and the United States which have lobbied for decades for monetary reparations to be paid to the descendents of slaves.

No legislation including reparations has been successful in either country, and the difficulty in determining who would be paid, how much they should be entitled to, and where the money would come from is likely to prevent it from coming to fruition.

Ceremonies, apologies, and even reparations aside, most of the people who took part in the events of Monday and Tuesday agree that the most important memorial is to ensure the evil of slavery is not forgotten — in the next 200 years, or ever.