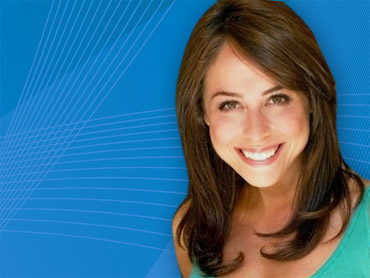 So far, 2003 has been a very good year for Queen Latifah.

The actress/rapper/producer/singer has just received her first Oscar nomination for a supporting role in the hit musical "Chicago" and now she is the star and executive producer of a box-office hit.

In "Bringing Down the House," the number one film at the box office in its debut weekend, she plays a blind date that costar Steve Martin meets online.

"I play a character, Charlene Morton, who is actually incarcerated, but she meets Steve Martin's character Peter in this law chat room. He's a tax attorney. So they arrange this blind date," Latifah explains.

But she isn't the lawyer he thought she was. Actually, she is a fugitive from jail who demands his help to clear her name of a false robbery conviction. They soon change each other's lives.

"He's worrying about approval and Charlene doesn't really need anybody's approval. She's smart. She's a girl from the hood, but she's very smart. Smart enough to fool him into thinking she was a lawyer. So and he's recently divorced. And you know, kind of missing his ex-wife so she kind of tries to help him get his family back together," Latifah says.

Besides Martin, Betty White plays Martin's boss sister who lives just across the street. "She is off the chain," says Latifah about how hilarious White is. Eugene Levy plays another funny character in the film. "He loves a thick chocolate goddess. That's his thing. I got him saying all these words through this whole film that are so funny. I mean I'm giving him every slang word in the book to say. And he delivers them perfectly," Latifah says laughing.

As for Martin, he is just a pleasure to work with she says. "He's sort of shy initially. It seems. But he's so smart, so quick-witted. We had a ball. We got to totally act silly and fun and I think Steve did an amazing job in this movie. You know, when we thought about this script and whom we wanted to play Peter, he was at the top of the list. So to find out he liked it and he wanted to do it was like oh, yes!"

"Bringing Down the House" brought in nearly $32 million in its debut weekend. It was the third-biggest March opening ever, behind the 2002 releases, "Ice Age" and "Blade 2."

With an Oscar and Golden Globe nomination Queen Latifah is in Early Show anchors Hannah Storm and Rene Syler's mind the new 'it" girl. What does Queen Latifah think about that? "I'll be the 'it' girl. But my 'it' kind of stays around for awhile," she says.