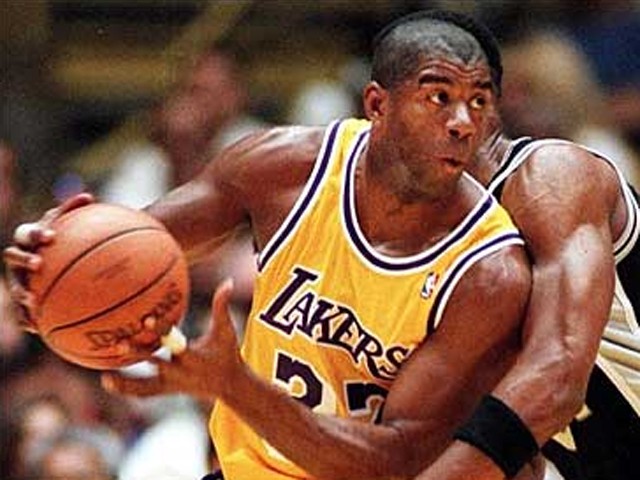 Magic Johnson stunned the sports world 20 years ago Monday by announcing he had contracted HIV, the virus that causes AIDS.

Back then, many believed the basketball Hall of Famer wouldn't be around much longer. But today, he's one of 33 million people living with HIV.

In 1991, Johnson said, "Because of the HIV virus that I have attained, I will have to retire from the Lakers today." But he made his way back to the court only months later.

With that stunning announcement, Earvin "Magic" Johnson -- one of the greatest basketball players of all time -- told the world about his illness.

Johnson went on to say, "I just want to make it clear, first of all, that I do not have the AIDS disease."

By stepping forward, Johnson put a very public face on something many then considered a death sentence.

AIDS researcher Dr. David Ho explained to CBS News, "In 1991, about 10 years into the known epidemic, there were still only a few medications that could be used to treat HIV infections, so most people went on to to die within a few years of diagnosis. And Magic Johnson felt no different from anybody else."

Former Laker AC Greene remembers getting the news, but believing his friend would be OK. Greene said, "He's so competitive. That's his persona, that's his DNA. He wants to win at any and every thing."

And, within a few years, Johnson was taking new drugs. Ho was one of the first physicians to see him.

Ho didn't technically treat him, but he was one of the first on his case. Dr. Michael Mellman and Ho continue to oversee Magic's care today. Mellman was the physician who made the diagnosis.

Ho said, "We also knew we working on new drugs, some of which could be turned into medications for our patients, and it was only a matter of time before some of them would come into play for him."

Johnson created the Magic Johnson Foundation to help educate people about HIV and AIDS. There were times he just wanted to play the game. It wasn't always easy.

Greene recalled, "(There were) guys who were just concerned, and they voiced their concerns."

Still, his teammates stood by him.

Greene said, "Collectively, as a team, we didn't have a problem."

Because Johnson knew it was a sport he never wanted to leave, he said at the 1991 news conference announcing he had HIV, "I plan on going on, living for a long time, bugging you guys like I always have."

Looking back on that announcement and what happened in the years following with Johnson's career, Sports Illustrated senior writer Jack McCallum said he thinks Johnson was probably the "best" person to get the illness, because of his ability to reach the public.

" ... He changed the dialogue," McCallum said. " ... The sports world was in medieval times with HIV and AIDS. And here ... it comes upon the most magnetic personality. It just seemed like sort of an existential joke, and it forced everyone to take a look at the issue, I think, honestly, in our society for the first time."

These days, Johnson is a mega-entrepreneur.

When asked about Johnson's thoughts on his HIV experience, McCallum said he asked Johnson whether he thought he was going to die.

McCallum said, "I asked him, 'Did you ever think you were going to die?' And he just said, 'You know, there was one moment when I had to get my affairs in order and, you know, I talked to my agent and said, 'This is what will happen if I die,'' but I don't think I'm going to,' and I think he looks back on it now as just another thing in an eventful life and, 'Let's move forward."'

Johnson today, McCallum said, has a message that anyone who gets HIV can beat it.

He said, "Proper medication, proper diet, mental outlook. Is that exactly true? Do you need to get to the best people and have some money? Maybe. But Magic's claim is that anyone can do this with the proper concoction of drugs. The question is, it's still not acceptable. People look at him, and say, 'Hey, it's OK to get HIV because I'm living with it.' That is the wrong message. The message is take care of yourself. Don't get it. But if you do, do the proper things to stay alive."