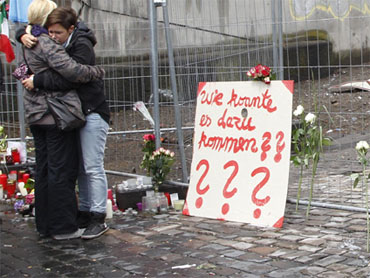 German prosecutors are investigating whether negligent manslaughter was involved in the deaths of 20 people killed in a crush at the Love Parade techno festival.

But amid a clamor of questions about who is to blame, they said Monday they haven't yet identified any suspects.

The tragedy Saturday happened near a tunnel that was the only entrance to the festival grounds in the western industrial city of Duisburg. Police said 511 people were injured - one of whom was still in life-threatening condition Monday.

Police also raised the death toll late Monday to 20 from 19 after a 21-year-old German woman succumbed to her injuries in a hospital.

It remains unclear what triggered the panic, but it appears that people trying to escape the surging crowd climbed up a metal stairway in front of the tunnel and then fell into the crowd and were trampled or crushed.

"The investigations are concentrating on the allegation of negligent manslaughter and negligent bodily harm," said Rolf Haferkamp, a spokesman for Duisburg prosecutors. "They are not directed against any concrete person at present."

A union representing German police has blamed organizers and officials in Duisburg. But witnesses also have pointed the finger at police and private security staff, saying the panic broke out after they closed one end of a tunnel - the only entrance - when the festival grounds became too full.

Police denied that and said they actually opened a second exit to disperse the crowd before the accident happened.

At a news conference Sunday, Duisburg officials, police and the organizers provided few answers, frequently deflecting questions by noting that an investigation was under way.

The daily Tageszeitung newspaper's sarcastic front-page headline summed up many Germans' reaction to that: "19 dead - No one was to blame." Berlin's B.Z. tabloid ran a picture of the officials under the headline "Parade of Failures."

An Italian woman who survived the trampling called it an "avoidable tragedy."

"The police made a mistake in letting all of those people inside the tunnel without an escape exit," Irina Di Vincenzo said at a news conference in her hometown of Grugliasco, Italy's ANSA news agency reported. "That makes me even sadder, that all of this could have been avoided when nothing was done. Things were overlooked."

One key question: whether the venue, an old freight railway station that local media estimated could handle 300,000 people, was suitable for the event.

German media reported that up to 1.4 million people showed up, although police suggested the figure was likely far lower given that the national railway brought 105,000 people to Duisburg by train in the preceding hours. Since the event was free, the number who attended may never be known.

Der Spiegel magazine reported Monday that the city had sent a letter to organizers limiting the maximum number of people at the grounds to 250,000. Haferkamp, the prosecutors' spokesman, didn't confirm that.

"The area was not large enough right from the start, that's what I think," Duisburg resident Kurt Moczko said. "I just can't imagine how this area should be sufficient for 1.4 million people."

"I think it is not right to simply blame the police, because I think the planning ahead of the event should have been different," he said.

The state of North Rhine-Westphalia, where Duisburg is located, on Monday ordered flags flown at half-staff on public buildings.

Mourners also gathered at the site of the accident to light candles or place written notes, many expressing disbelief. One of them asked: "How could it happen?"

Police said all but 43 of the 283 people hospitalized after the accident had been released.

The Love Parade was once a Berlin institution, but was held for the last time in the capital in 2006 after suffering from financial problems and tensions with city officials over cleanup costs.

It started rotating around the cities of the Ruhr industrial region in 2007, though last year's designated host, Bochum - a smaller place than Duisburg - canceled it over concerns that the city lacked the infrastructure to cope.

Organizers said Sunday that the Love Parade will never be held again.