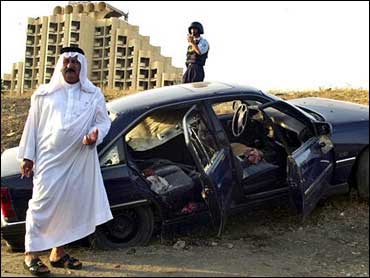 In northern Iraq, a series of battles between Iraqi authorities and insurgents in the city of Mosul killed 14 civilians and eight insurgents, the U.S. military said.

Iraqi authorities clamped a curfew on the area and sealed off bridges into the city to restore order. The fighting was the fiercest in Mosul in months, and local authorities said insurgents appeared to be testing the police. No Iraqi or coalition forces were killed in the violence, the U.S. military said.

And further south, in an extraordinary assault, gunmen in the city of Fallujah stormed a kidnappers' lair and forced the overmatched militants inside to flee, freeing four Jordanian truck drivers held captive, local officials said Wednesday.

The raid, in a city that has long been hostile to the U.S. military and supportive of Saddam Hussein, marked the first time local gunmen had broken foreign hostages out of captivity. They called the kidnappers "terrorists" and outsiders.

Some militant groups — which commonly attack U.S. and Iraqi forces with bombings and shootings — have turned to kidnapping in recent weeks, snatching poorly protected truckers driving the dangerous route near Fallujah, a hub of the insurgency 40 miles west of Baghdad.