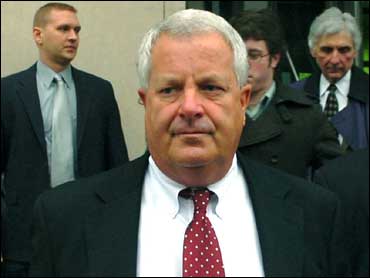 Two Pennsylvania judges charged with taking millions of dollars in kickbacks to send youth offenders to privately run detention centers pleaded guilty to fraud Thursday in one of the most stunning cases of judicial corruption on record.

The judges pleaded guilty in federal court in Scranton to honest services fraud and tax fraud. Their plea agreements call for sentences of more than seven years in prison. They were permitted to remain free pending sentencing.

The gray-haired jurists said little at Thursday's hearing, and declined to comment to reporters afterward.

Prosecutors described a scheme in which Conahan, the former president judge of Luzerne County, shut down the county-owned juvenile detention center in 2002 and signed an agreement with PA Child Care LLC to send youth offenders to its new facility outside Wilkes-Barre.

Ciavarella, who presided over juvenile court, sent youths to the detention center while he was taking payments, prosecutors said.

For years, youth advocacy groups complained that Ciavarella was ridiculously harsh and ran roughshod over youngsters' constitutional rights. Ciavarella sent a quarter of his juvenile defendants to detention centers from 2002 to 2006, compared with a statewide rate of one in 10.

Among the offenders were teenagers who were locked up for months for stealing loose change from cars, writing a prank note and possessing drug paraphernalia. Many had never been in trouble before, and some were imprisoned even after probation officers recommended against it. Many of the youths didn't have attorneys.

Ciavarella has specifically denied sending kids to jail for cash, and had indicated he would not go through with the guilty plea if the government offered that as evidence.

Thus prosecutors left out any mention Thursday of a quid pro quo, presenting only enough evidence to establish that crimes had occurred.

But Assistant U.S. Attorney Gordon Zubron said after the hearing that the government continues to allege a quid pro quo. "We're not negotiating that, no. We're not backing off," he said.

The prosecutor said it will be up to U.S. District Judge Edwin Kosik to settle the matter. Kosik could reject the proposed sentence as too light if he decides there was a quid pro quo.

"I think there will be significant disagreements as to what the facts are," Zubrod said. "Was there a connection between the payments and the money, and young people going to prison? Those are issues that are going to be addressed later by the court. There's going to be plenty of time to fight about that."

The judges were charged on Jan. 26 and removed from the bench by the Pennsylvania Supreme Court shortly afterward.

Fifteen-year-old Bernadine Wallace was sentenced to a month in lock-up for a threatening note she posted on her MySpace page, reports CBS News correspondent Seth Doane.

"I was thinking to myself, 'I don't deserve this. I don't think that I did that much wrong. I'm not a criminal'," she said.

"You saw the judges come out of court today. How were you feeling?" Doane asked Wallace's mother.

"Angry," Flo Wallace said. "How did they get to walk out with all these charges? When she went in front of them, she got out of shackles."

(AP Photo/Matt Rourke)
Kurt Kruger, now 22, pictured at left, had never been in trouble with the law until the day police accused him of acting as a lookout while his friend shoplifted less than $200 worth of DVDs from Wal-Mart. He said he didn't know his friend was going to steal anything.

Kruger pleaded guilty before Ciavarella and spent three days in a company-run juvenile detention center, plus four months at a youth wilderness camp run by a different operator.

"Never in a million years did I think that I would actually get sent away. I was completely destroyed," said Kruger, who later dropped out of school. He said he wants to get his record expunged, earn his high school equivalency diploma and go to college.