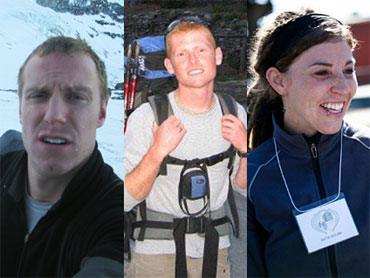 Five days into the search for two missing climbers, authorities in Oregon were piecing together a theory about what may have gone wrong as hope dwindled that the pair would be found alive.

Rescue workers said Tuesday that because the snow on Mount Hood is so unstable and prone to avalanches, there could be no prudent attempt any time soon to send rescue workers to the lofty crags where 29-year-old Katie Nolan and 24-year-old Anthony Vietti are believed to be.

An Oregon doctor who specializes in rescues told family members and reporters that the chances the two are alive are exceedingly slim and must be weighed against the jeopardy rescuers would face attempting to retrieve them.

That left families and rescue workers to their inferences about what happened on Friday when the two and 26-year-old Luke Gullberg, all experienced climbers from Oregon and Washington, set out on a route more challenging than taken by most of the thousands who climb Mount Hood each year.

The prevailing idea is that an accident befell them, perhaps involving Nolan, and Gullberg went for help, said rescue coordinator Nate Thompson of Clackamas County.

The idea Nolan was hurt arises because mountaineers found just one of her gloves Saturday with the body of Gullberg on Reid Glacier at an elevation of 9,000 feet, at the base of the 1,500-foot Reid headwall. The slope rises at a 50-degree angle from the glacier to within a few hundred feet of relatively easier climbing to the top above 11,000 feet.

They found neither of Gullberg's gloves, Thompson said, leading them to think that Nolan had lost one of hers in the accident, that Gullberg had left her his, along with his pack, and that he had headed downhill, taking Nolan's single glove for whatever warmth it would provide.

After a fall in which he suffered bruises and scrapes, Gullberg died of exposure. Nearby were tracks and some of his equipment, including a camera whose pictures gave rescue workers information about the route and equipment the climbers took.

Over the weekend and Monday, Northwest rescue climbers took to the mountain, but the danger of avalanches turned them back from the higher elevations where they thought Nolan and Vietta might be. They worked in breaks between the snowfall that covered what bare rock had been exposed and gave the headwall a glistening white shroud.

Surveillance from a National Guard helicopter and fixed-wing aircraft turned up no sign of life such as a pole sticking up from a snowcave.

Then a winter storm settled on the mountain Monday evening, expected to last for days, and shut down searches.

Steve Rollins, a rescue leader, said it would take four or five days of good weather to ease avalanche danger enough to allow climbing teams to go back to the headwall, and such conditions are infrequent in Mount Hood winters.

"If there is anything we could do, we would do it," Rollins said at a press conference. "We will go to extreme lengths to rescue people, but we have to come home at the end of the day."

Dr. Terri Schmidt, an expert on hypothermia and mountain survival, said she told family members that in such rescue operations, time is the most crucial variable: After 48 hours, there is but a 1 percent chance of survival, and day by day it diminishes.