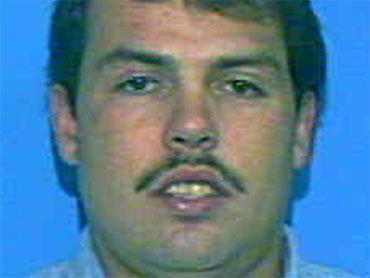 The search continued Sunday for two convicted murderers who escaped from a private prison in northwest Arizona, while a third escaped convict was back behind bars following an early morning shootout with police in western Colorado.

Police believe the two who remain at large are still in Arizona.

The officer pursued Renwick, gunshots were exchanged, and the convict was eventually taken into custody without anyone being injured, Ryan said.

Renwick had been serving a 22-year sentence for second-degree murder when he and the other two inmates escaped Friday evening by cutting a hole in the prison's perimeter fence. The men then kidnapped two semi-truck drivers at gunpoint and used the big rig to flee, authorities said.

Police said the two men who remain at large — Tracy Province, 42, and John McCluskey, 45 — should be considered dangerous. Province was serving a life sentence for murder and robbery, and McCluskey was serving 15 years for second-degree murder, aggravated assault and discharge of a firearm.

The men are believed to be traveling with a woman suspected of helping in the escape, 44-year-old Casslyn Mae Welch.

"The information from law enforcement suggests they are still in Arizona, and there's an all-points bulletin out for these people," Ryan said.

Authorities believe the three are in a silver, four-door Volkswagen Jetta with the Arizona license plate 334 VAN. Authorities said one of the escaped convicts bought the car Saturday in west Phoenix. Police believe he may have presented a phony ID during what apparently was a cash transaction.

According to police Sgt. James Jackson, at about 5 a.m. local time Saturday, the group kidnapped two drivers of a semi-truck in Kingman and forced them at gunpoint to drive two hours east to Flagstaff.

The group left the drivers, unharmed, in the truck at a stop just off Interstate 40 and then fled. Police spent much of Saturday using helicopters and dogs to search for the men.

Authorities urged anyone with information to use caution and call police immediately.

Ryan said Sunday the escape is under investigation.

"We have great concerns that there was laxness on the part of security staff at this private prison, but I'm going to allow the investigation to run its course," said Ryan, who plans to meet with prison officials in the next day or two.