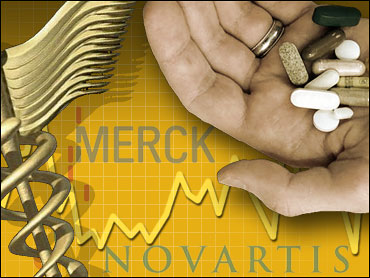 The once-a-day medications are the first in a new class of Type 2 diabetes drugs that work in a unique way, and competitors Merck & Co. and Novartis AG both hope to win Food and Drug Administration approval to begin selling them by year's end.

That's good news for the nearly 21 million Americans — or 7 percent of the population — who struggle with the disease, reports CBS News correspondent Elizabeth Kaledin.

It's not clear how widely used the drugs would be, given the expected price tag of $3 to $6 a day. Older diabetes drugs cost 50 cents a day or less.

Still, specialists eagerly await the new options, which work with a one-two punch: They increase levels of a hormone that triggers the pancreas to produce more insulin to process blood sugar while simultaneously signaling the liver to quit making glucose. The pills do that by blocking production of an enzyme, called DPP-4, that normally inactivates that hormone.

The positive effects of the drugs, coupled with fewer of the negatives seen in other diabetes treatments, is what sets them apart, said Dr. John Buse, vice president of the ADA.

"It's combining some of the effects of three to four classes of drugs used today. That is what has everyone excited," said Buse, cautioning that the expected cost of Januvia and Galvus likely would curtail their use. Side effects of the pills include cold and flulike symptoms and headaches.

In Type 2 diabetes, patients either don't produce enough insulin or cells in the body ignore it. Insulin is needed to process sugar; without it, blood sugar levels soar.

American Diabetes Association guidelines suggest diabetics cut their levels of an averaged measure of blood sugar levels, called A1c, to less than 7 percent. Many, if not most, diabetics exceed that threshold. Helping them drop below it could reduce their risk of serious complications, like kidney failure and amputations, the ADA says.

"There is a great need in the care of patients with Type 2 diabetes to improve glycemic control. Many, many patients are not in control. The exciting thing you are hearing today is these are new options to treat patients," said Dr. Peter Stein, of Merck Research Laboratories. Details were being presented Tuesday at the American Diabetes Association's annual scientific conference. Stein and others discussed them under embargo at a Monday news conference.

Merck said its pill, Januvia or sitagliptin, lowered blood sugar levels by 0.67 percent in a yearlong trial, or just as much as another, older drug, glipizide. Roughly two-thirds of patients reached the ADA's 7 percent goal.

Most important, Merck said the Januvia patients also lost weight and experienced fewer episodes of excessively low blood sugar than those on glipizide, a member of the sulfonylurea class of drugs. Excess weight is a common problem in Type 2 patients.

Novartis said its pill, Galvus or vildagliptin, reduced blood sugar levels by 1.9 percent when used with another older drug, pioglitazone, which reduces insulin resistance. Nearly two-thirds, or 65 percent, of the patients in the six-month trial reached the ADA-recommended blood sugar level, compared to just shy of 43 percent of those treated with either of the two drugs alone. Elderly and obese patients showed even greater drops.

In that and a second trial, patients treated with the drug either lost some weight or showed no significant weight gain, Novartis said.

A third company, Novo Nordisk Inc., is developing an injectable drug that is an analog of the hormone inactivated by the enzyme that the Merck and Novartis pills block.