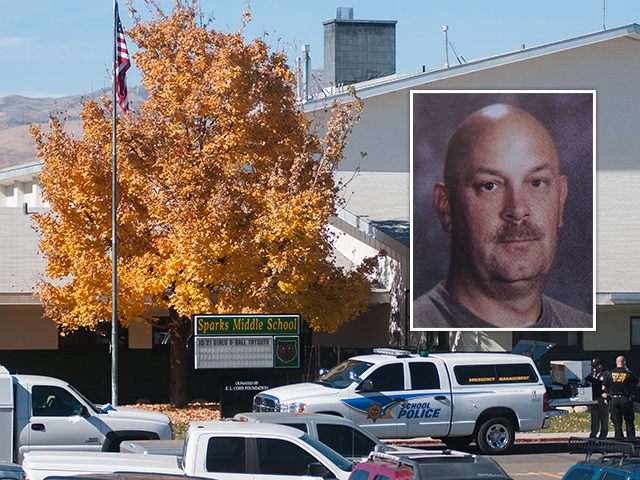 SPARKS, Nev. A 13-year-old student armed with a semi-automatic handgun opened fire on a middle-school campus just before the starting bell Monday, wounding two boys and killing a teacher member who was trying to protect other children, police said.

The lone suspected gunman then shot himself dead, police said. Authorities say no shots were fired by law enforcement during the incident, which played out in front of 20 to 30 students, most of them 12 to 13 years old.

Police said a teacher approached the armed student and told him to hand over the gun, but the student shot him in the chest. Kyle Nucom, 13, said he recognized the shooter as a fellow student.

The two wounded students were both 12-year-old boys. One was shot in the stomach, the other in the shoulder. Both were in stable condition last night, police said.

Police said between 150 and 200 officers, including some from as far as 60 miles away, responded to the shooting.

The slain faculty member was identified as Michael Landsberry, a 45-year-old math teacher. A former Marine, he had served two tours of duty in Afghanistan and remained active in the Nevada Air National Guard.

"In my estimation, he is a hero ... We do know he was trying to intervene," Reno Deputy Police Chief Tom Robinson said.

Landsberry is survived by his wife and two stepdaughters.

"To hear he was trying to protect those kids doesn't surprise me at all," his sister-in-law, Chanda Landsberry, told the Reno Gazette-Journal. "He could have ducked and hid, but he didn't. That's not who he is."

The popular teacher also coached the school's soccer team, and soccer players said they would rub his bald head for luck.

"He was just an amazing teacher to me," said a tearful Vanessa Jimenez, who was in Landsberry's class last year. "He was like a hero to me."

On his school website, Landsberry posted a picture of a brown bear and took on a tough-love tone, telling students, "I have one classroom rule and it is very simple: 'Thou Shall Not Annoy Mr. L.'"

The name of the suspect wasn't immediately released and the motive was not known. The gun he used belonged to his parents, CBS News' John Blackstone reported.

Sparks Mayor Geno Martini said at an afternoon press conference that there was no reason for citizens to fear more violence.

"The city is very safe," Martini said. "This is an isolated incident."

The shooting happened on the school's campus, but outside the school building itself, according to police. A Sparks police dispatcher said the first call for the incident came in at 7:16 a.m. Monday.

Washoe County School District spokesman Charles Rahn says the middle school and next-door Agnes Risley Elementary School were evacuated to Sparks High School. Classes at the middle school will be canceled for the rest of the week.

"As you can imagine, the best description is chaos," Deputy Police Chief Robinson said. "It's too early to say whether he was targeting people or going on an indiscriminate shooting spree."

At the evacuation center, parents walked with their arms around their children, some of whom were in tears.

"We came flying down here to get our kids," said Mike Fiorica, whose nephew attends the school. "It's really chaotic. You can imagine how parents are feeling. You don't know if your kid's OK."

Gov. Brian Sandoval issued a statement after hearing about the shooting.

"I was deeply saddened to learn of the horrific shooting at Sparks Middle School this morning. My administration is receiving regular updates and the Nevada Highway Patrol is assisting at the scene," he said. Sandoval extended his thoughts and prayers to those affected.

Senate Majority Leader Harry Reid offered his sympathies to those who experienced "a traumatic morning."

"No words of condolence could possibly ease the pain, but I hope it is some small comfort that Nevada mourns with them," the Nevada Democrat said in a statement.

"My thoughts and prayers continue to be with the victims, students, families, teachers, and staff during this difficult time," he said in a statement.

The school, located in a working-class neighborhood, enrolls about 700 students in seventh and eighth grades.

The violence erupted nearly a year after a gunman horrified the nation by opening fire in Sandy Hook Elementary School in Newtown, Conn., leaving 26 dead. The Dec. 14 shooting reignited debate over how best to protect the nation's schools and whether armed teachers should be part of that equation.

In a statement on the website of Sandy Hook Promise, a gun control advocacy group, Nicole Hockley, whose son Dylan was killed in the shooting said, "It's moments like this that demand that we unite as parents to find common sense solutions that keep our children_all children_safe, and prevent these tragedies from happening again and again."

Washoe County School District held a session in the spring in light of the Connecticut tragedy to educate parents on what safety measures the district takes.

Sparks, a city of roughly 90,000 that sprung out of the railway industry, lies just east of Reno.