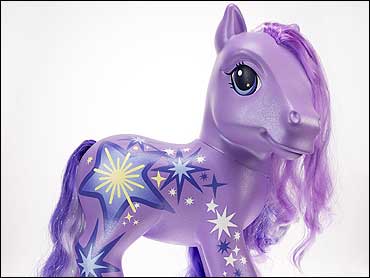 "The Early Show" continued its "Time Machine" series with the year 1983.

What was on store shelves that year that captivated consumers?

At the time, it was all about the toys. Cabbage Patch Kids, Care Bears, and My Little Ponies landed on store shelves, but they didn't stay there for very long as the toy craze set in.

Cabbage Patch Kids grabbed headlines for their sales of more than three million dolls, according to the Cabbage Patch official Web site. The dolls even landed the cover of Newsweek magazine.

Care Bears were also a favorite in 1983. The popular plush teddy bears were such a success they even starred in their own television special.

Another favorite of young girls was My Little Pony, a set of six colorful ponies at one point so popular they outsold Barbie dolls.

And much to the delight of boys everywhere, the first Nintendo console, Famicom, the original Nintendo, was released in Japan. Initially deemed a failure, it wasn't until the launch of the iconic video game "Super Mario Brothers" that Nintendo became a worldwide sensation.

The year 1983 also had some toys for adults, as well. Swatch watches were introduced. The classic novelty straps and bright colors were a favorite among consumers that year. In 1983, a Swatch watch cost just $35.

Another gadget for adults was the very first commercially sold cell phone, the Motorola DynaTAC 8000X. The phone sold for $3,995 in 1983, which is equivalent to paying $8,663 today, according to the U.S. Bureau of Labor Statistics inflation calculator.

In 1973, Motorola showed off a prototype of the world's first portable cellular telephone. That phone, which measured more than a foot long, weighed almost two pounds and ultimately became commercial available in 1983. Its battery could provide one hour of talk time, and its memory could store 30 phone numbers. It may not have been pretty, but it did let you talk while on the go -- if you could lift it, that is.