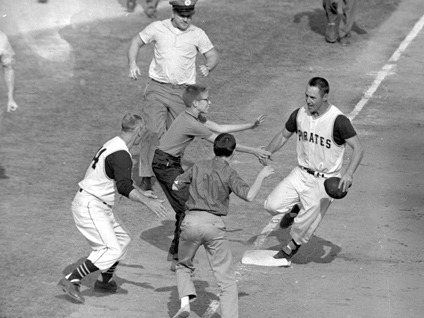 Television archives are lacking thousands of hours of classic broadcasts which were never preserved - they simply disappeared into the ether, never to be seen again. A complete recording of the very first Super Bowl broadcast, for example, does not exist, even though it was carried by two networks.

For many baseball fans, a Holy Grail would be to re-watch the seventh game of the 1960 World Series between the Pittsburgh Pirates and New York Yankees, a contest dubbed by some "The Best Game Ever."

Broadcast by NBC, there is no copy of the game other than a few newsreels that show highlights, including Bill Mazeroski's home run that won the game, and the championship, for the Pirates.

Today The New York Times reported a remarkable discovery in the most unlikely place: A 16mm kinescope recording of the entire broadcast was found in the former wine cellar of singer Bing Crosby, where the reels have rested undisturbed for 50 years.

Crosby, who was a part-owner of the Pirates, evidently was also extremely superstitious and could not bear to watch the deciding game of the series for fear of jinxing a Pittsburgh win. (The fear was so great he "escaped" to Paris and listened to the game on the radio.)

But in order to see the game later (and lacking the future technology of home videotape and DVRs), Crosby hired a film crew to record the NBC broadcast, featuring announcers Mel Allen and Bob Prince, off a TV screen.

The five reels of film were found in December in a vault that was once a wine cellar at Crosby's home in Hillsborough, Calif., near San Francisco.

Robert Bader, vice president for marketing and production for Bing Crosby Enterprises, told the Times he uncovered the film canisters, which are in excellent condition, while searching Crosby's vault for TV recordings of the singer, who died in 1977.

The MLB Network will "re-broadcast" the game in a special this December.