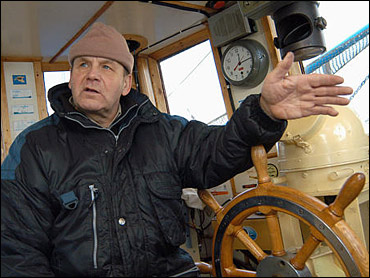 Leaning across the wooden helm of his boat, Vello Mass scans the Baltic Sea to the horizon and muses about the treasures lying beneath the cold, gray waves.

"There are hundreds of Viking ships out there, hundreds of old trading ships, hundreds of warships," the 63-year-old wreck-hunter remarks. "The Baltic's an archaeological paradise."

He's already pinpointed about a dozen wrecks, most recently the Russalka, Russia's first armored naval ship, which went down nose-first between Estonia and Finland in a storm in 1893 and rammed itself into the seabed like an enormous sword.

Now, on the bridge of his tiny research boat docked in Estonia's capital, Tallinn, the burly, blue-eyed Estonian speaks excitedly about the next one he hopes to find: the passenger ship Vironia, torpedoed by German warplanes off Estonia during World War II.

Politics and nature have conspired to preserve the secrets of the Baltic.

The Cold War seriously hindered exploration, and the low salt content of the Baltic waters kept away the shipworms that feast on wooden wrecks.

Sweden's royal warship Vasa, the most celebrated Baltic Sea discovery, was so well preserved after being raised in 1961, 333 years after it sank, that minute details were clearly visible, down to the flashing teeth of the carved lions that adorned its elaborate exterior.

It was discovered 100 feet deep in Stockholm's harbor by a Swedish marine explorer, Anders Franzen.

"If the Vasa had sunk in almost any other sea, you might find parts of it that were buried under the seabed, but any wood exposed to the sea would be gone," said Stefan Wessman, a marine archaeologist at the Maritime Museum in Estonia's Baltic neighbor, Finland.

"The Baltic Sea has huge potential - and I believe this is recognized by scientists internationally," he said. "There is nothing comparable to it in the world."

U.S. marine scientist Robert Ballard, famous for discovering the Titanic, also acknowledges "the discovery potential of the Baltic given its unique characteristics for preservation of ancient wooden ships."

Sweden's Jonkoeping schooner, sunk by a German submarine in 1916 and salvaged off Finland in 1998, held nearly 5,000 bottles of top-quality French Gout Americain champagne, bound for Russia's last czar. They had been perfectly preserved at a constant 39.2 degrees. Several bottles were auctioned by Christie's in London at $4,000 apiece.

The Baltic is only 180 feet deep on average, making wrecks much more accessible than those like the Titanic, resting more than 12,000 feet under the Atlantic.

That worries Ballard, who said in an e-mail responding to The Associated Press' questions that easily accessible artifacts could be destroyed or spirited away before scientists could study them.

A Swedish submarine crew doing routine scanning in 2002 was shocked to stumble upon an 18th century ship intact and upright - as if set lovingly on the seabed, a carved sea horse presiding majestically at its stern. Human skulls on the deck were the only obvious signs of mishap.

The mystery ship has never been identified or salvaged.

"The Soviets were paranoid about everything: that we might see underwater military equipment, that we might escape to the West," recalled Mass.

With no courses available on marine archaeology, Mass taught himself, taking inspiration from the films made by the undersea explorer Jacques Cousteau.

Now that the Iron Curtain is gone, the Baltic states are back in touch. Sweden, for instance, donated a modern sonar unit for Mass' converted fishing trawler.

He's now one of just a few regional experts in the field, a one-man force in Baltic shipwreck hunting.

Speaking in his office in Tallinn's Maritime Museum, he keeps excusing himself to answer phone calls from counterparts in neighboring countries asking about his latest discoveries.

"There's a hundred years' worth of work out there," he said, estimating that 10,000 ships have sunk near Estonia alone. "Life's short. I've got to give it 100 percent."

Mass thumbs through old newspaper clippings and quizzes fishermen for clues about the sleek white Vironia, which was torpedoed as it ferried Soviet officials fleeing the 1941 Nazi invasion of Estonia.

Fishermen have told him their nets keep snagging near where the Vironia is believed to have perished.

A prime source for data on older wrecks are the Danish National Archives, where customs records from 1490 to 1856 list details and movements of every ship entering the Baltic.

Among ships identified using the Danish records was Holland's Vrouw Maria, which sank off Finland en route to St. Petersburg in 1771. It was listed as carrying artwork for Russian Empress Catherine the Great. It was found in 1999, but hasn't yet been salvaged.

All 10 Baltic countries have salvage laws to protect wrecks and their contents. Sites of modern-day disasters, like the Estonia, a car-and-passenger ferry that went down in 1994 with 852 lives lost when waves ripped off its bow door, are considered graves and are legally off-limits to divers and salvagers.

Mass said his fantasy is to find an Estonian-built ship from the Viking era, when Estonians themselves staged raids across the Baltic Sea.

It's not only ships in the Baltic that are stirring excitement.

Stone Age forts, overtaken by rising seas, have been found. In June explorers found a Swedish DC-3 shot down by Soviet fighters in 1952 while on a spy mission.

And treasure? It's talked about all over the Baltic coast, though Mass doesn't believe it. "I've got history on my mind," he said with a short laugh, "not gold."

U.S. Coast Guard intercepts sail freighter with 191 Haitians on board