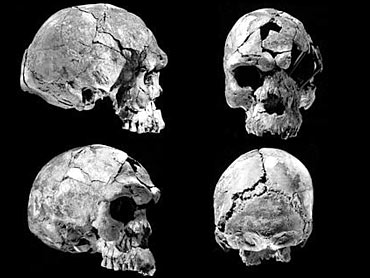 Scientists have unearthed three 160,000-year-old human skulls in Ethiopia that are the oldest known and best-preserved fossils of modern humans' immediate predecessors.

The nearly complete skulls of an adult male and a child and the partial skull of a second adult appear to represent a crucial stage of human evolution when the facial features of modern humans arose.

"They're not quite completely modern, but they're well on their way. They're close enough to call Homo sapiens," said Tim White, a University of California, Berkeley paleontologist who was co-leader of the international team that excavated and analyzed the skulls.

Previously, the earliest fossils of Homo sapiens found in Africa had been dated to about 130,000 to 100,000 years, although they were less complete and sometimes poorly dated, White said.

The new skulls, which were dated at between 160,000 and 154,000 years old, are described in two papers that appear in Thursday's issue of Nature.

White and his colleagues assigned the new creatures to a subspecies of Homo sapiens they named Homo sapiens idaltu - idaltu meaning "elder" in the Afar language.

Two other scientists not involved with the research said the skulls are an important find that fill a big gap in the African human fossil record, the period between about 100,000 and 300,000 years ago.

They agreed with White that the skulls' age and appearance strongly support genetic evidence that modern humans arose in Africa between 100,000 and 200,000 years ago - and not at multiple locations in Europe, Africa and Asia as some researchers suggest.

Rick Potts, director of the Human Origins Program at the Smithsonian Institution, said the skulls, while still large and thick-boned, are undeniably modern.

Unlike the heavy brows and projecting facial features of earlier humans, in the news skulls those features have retracted dramatically under the braincase and there is a prominent forehead.

Potts said that while White and his colleagues conclude that the fossil skulls are likely those of ancestral subspecies of Homo sapiens, he believes they represent modern Homo sapiens.

"My view of it is that these fossils have enough modern traits to be considered the earliest well-dated fossils of our species of modern Homo sapiens," he said.

Potts said he would not be surprised if additional excavations in Africa push back the origins of modern humans to about 200,000 years - humans who would have then spread to Europe and Asia.

G. Philip Rightmire, a paleoanthropologist at State University of New York at Binghamton, called the skulls a "spectacular" find.

He said they provide the clearest fossil evidence to date for an African origin of modern humans, and strike another blow against the idea that modern humans had a "multiregional" origin both within and outside the African continent.

"I think this pretty much serves as another nail in the coffin of multiregionalism," Rightmire said.

A proponent of the multiregional theory disputed that conclusion, saying the paper ignores fossils of about the same age of nearly modern humans found in Europe, China and Indonesia.

Milford Wolpoff, a professor of biological anthropology at the University of Michigan in Ann Arbor, also said the skulls, while significant, shed little light on the origins of modern humans.

The skulls were found in a desolate area about 140 miles northeast of Ethiopia's capital, Addis Ababa, near the village of Herto.

Skull fragments from a total of 10 individuals were unearthed, but conspicuously lacking were their jaws and any bones below the neck.

White said two of the skulls appear to have been scraped clean of flesh, suggesting an ancient mortuary practice, or possibly cannibalism.

Scattered across the same area were thousands of stone tools, including hand axes, along with the butchered bones of hippopotamus and antelope. White said the site, once the lush shoreline of a large lake, was probably a seasonal foraging ground for the humans.