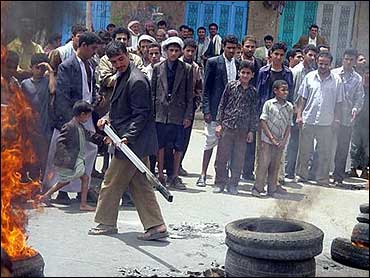 Rioters angry over cuts in subsidies clashed with security forces in several cites for a second straight day Thursday, smashing stores and setting cars on fire in Yemen's worst civil strife in more than a decade, killing 16 people and wounded more than 30.

The violence broke out Wednesday, when eight people were killed, a day after the government announced it was cutting subsidies on oil products by more than half, part of new belt-tightening reforms.

Municipality workers had barely finished cleaning the streets of San'a of damage from Wednesday's clashes when the violence erupted again. Fires broke out and gunfire was heard in several neighborhoods, and army tanks lined the main streets and surrounded the offices of the Cabinet, the ruling party and radio and television buildings.

"Prices have risen and we're afflicted, while not one single corrupt official has been held accountable," Mohammaed al-Baazany, one protester said. "There are officials living in houses worth $10,000 when their (monthly) salary is only $100, where is all that coming from?" added the 25-year-old unemployed university graduate.

"Hunger is merciless," he said.

The riots, in at least a half dozen cities, was worse than violence that broke out in 1992, also over price increases. The new subsidy cuts mean a near doubling of prices of gasoline, diesel, kerosene and gas compressed in containers for public use, while tickets for some public transport increased by about 30 percent — straining household budgets in this impoverished nation on the southern tip of the Arabian Peninsula.

The government of Yemen — a U.S. ally in the war on terror — has said it is trying to reduce budget deficits, but it faces growing resentment over the struggling economy. Unemployment currently runs at 36 percent. Yemen discovered oil in 1986, but the government has been accused of rampant corruption and failing to pump oil wealth into the economy.

One person was killed in San'a, three more in the city of Sa'dah, to the northwest, and 12 more in the cities of Marib in the north, Dali and Taaz in the south and the Red Sea port of Hudaydah, according to police and medical officials.

Protesters set two army cars on fire and broke into a police station, freeing all the prisoners inside in Lawdar, a town 155 miles southeast of San'a and stronghold for Muslim fundamentalists.

Ibb, a province some 120 miles south of the capital, San'a witnessed the worse material damage, with serious sabotage to public property, police said.

Two journalists working for local papers were arrested and their cameras confiscated, the press syndicate and an editor said. Ahmed Said, editor-in-chief of the Al-Wahdawi weekly confirmed that a journalist from his paper, plus the Al-Asima weekly were rounded up by police.

Correspondents for foreign and Arab television networks were told not to photograph or film the riots, but no official ban was issued. The camera of an Associated Press reporter was confiscated by soldiers, and Al-Jazeera satellite network reported that a driver and cameraman of theirs were detained while covering the riots.

More than 48 protesters have been rounded up by police in San`a and Dali since the clashes started, police officials said.