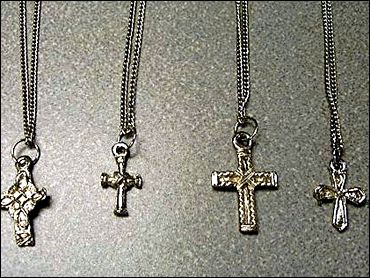 Four import companies have voluntarily recalled 150 million pieces of toy jewelry sold in vending machines over concerns that some of it could pose a risk of lead poisoning, federal regulators said Thursday.

The recall, announced Thursday by the Consumer Product Safety Commission, is one of the largest in U.S. history. The recall followed a CBS News investigation that showed many of the trinkets could give a child lead poisoning if mouthed for an hour.

Three months ago, CBS News had several pieces of children's jewelry tested for lead at an independent lab. The results showed lead levels in most of them were dangerously high.

After CBS News Correspondent Mika Brzezinskin showed those results to the CPSC, the government conducted its own testing on samples from around the country and found that half of them contained high lead levels -- some high enough to have fatal effects if ingested.

About half of the 150 million pieces of toy jewelry actually contain lead, but because it is difficult to distinguish the lead jewelry from the non-lead jewelry, the industry decided to recall all of it, the commission said.

Brzezinski reported on the potential danger of the gumball trinkets two months ago. Her story focused on an Oregon boy named Colton Burkhart. Colton was 4 years old when he swallowed a pendant. Doctors removed it, but not before Colton had absorbed 12 times the normal level of lead in his bloodstream, enough to nearly kill him.

Even now, Colton's future is uncertain.

CBS News purchased toy jewelry from several vending machines, including some imported by LM Becker, and had them analyzed at an independent lab.

The results were disturbing. If mouthed for an hour, six out 10 pieces would have released enough to give a child lead poisoning as much as seven times over.

The test results were shown to Hal Stratton, chairman of the Consumer Product Safety Commission. The results were high enough to prompt his agency to conduct its own testing and notify importers. The recall followed.

The commission said it has received one report of lead poisoning in which a child swallowed a piece of toy jewelry that had been previously recalled. No reports of injury or illness have been received for the recalled products announced Thursday, the commission said.

Young children sometimes mouth or swallow items like these, and lead can leach from the jewelry into the child's body. Lead poisoning in children is associated with behavioral problems, learning disabilities, hearing problems and growth retardation.

The four firms have told the commission they have stopped importing toy jewelry with lead and will work on eliminating hazardous levels of lead in future imports of toy jewelry.

Stratton urged parents to search their children's toys for this jewelry and throw away the recalled items.

The commission collected and analyzed some samples of toy metal jewelry sold in vending machines and found ten products with lead. The industry volunteered to recall additional products.

The rings are gold- or silver-colored with different designs and paint finishes and center stones in a variety of shapes.

The necklaces have black cords, black ropes or gold- or silver-colored chains. They have pendants, crosses or various geometrical designs and may include fake gemstones.

All the jewelry was manufactured in India.

The toy jewelry was sold in vending machines nationwide from January 2002 through June 2004. The items cost between 25 cents and 75 cents.

Consumers should throw away the recalled jewelry. People seeking more information can contact an industry hot line at 1-800-441-4234 or visit the firms' Web site.