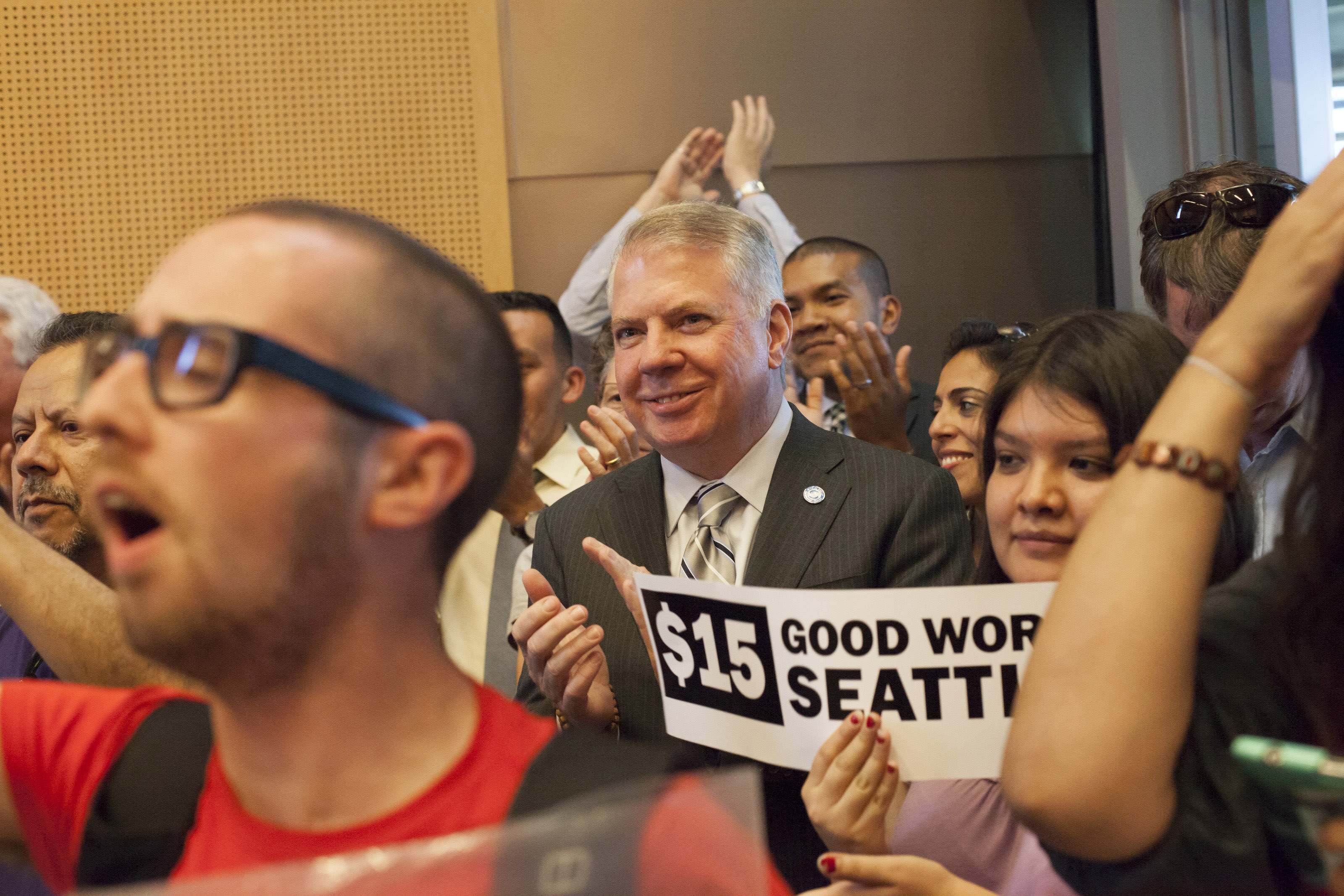 SEATTLE -- Seattle activists celebrated a successful campaign to gradually increase the city's minimum wage to $15 by calling for a national movement to close the income and opportunity gaps between rich and poor.

The Seattle City Council unanimously passed an ordinance Monday that would give the city the highest minimum wage in the nation.

Socialist City Council Member Kshama Sawant, who after the council meeting called on the people of America to elect more independent and socialist candidates, said the push for a higher minimum wage is spreading across the nation.

"Seattle may be a hippie city. We may wear socks with our sandals," but it's also a city where different progressive groups can work together to bring about change, Sawant said.

Some critics said the plan doesn't go far enough, while others said it would lead to layoffs and higher prices for consumers, reports CBS Seattle affiliate KIRO-TV.

The minimum wage issue has dominated politics in the liberal municipality for months, and a boisterous crowd of mostly labor activists packed the council chambers for the vote. They held signs that said "15 Now," chanted, cheered and occasionally jeered when amendments they favored were voted down.

Mayor Ed Murray, who was elected last year, had promised in his campaign to raise the minimum wage to $15 an hour, as did Sawant in her campaign last year.

"We did it. Workers did this," she said. "We need to continue to build an even more powerful movement."

Council Member Tom Rasmussen said, "Seattle wants to stop the race to the bottom in wages" and address the "widening gap between the rich and the poor."

The International Franchise Association, a Washington, D.C.-based business group that represents franchise owners, said it plans to sue to stop the ordinance.

"The City Council's action today is unfair, discriminatory and a deliberate attempt to achieve a political agenda at the expense of small franchise business owners," the group said in a statement.

The measure, which would take effect on April 1, 2015, includes a phase-in of the wage increase over several years, with a slower process for small businesses. The plan gives businesses with more than 500 employees nationally at least three years to phase in the increase. Those providing health insurance will have four years to complete the move. Smaller organizations will be given seven years.

The ordinance came from recommendations made by an advisory group of labor, business and nonprofit representatives convened by Murray. After more than four months of discussion, the group presented its plan last month. Last week the council delayed implementation by the few months and approved a sub-minimum wage for teenagers, a provision opposed by labor representatives.

San Francisco currently has the nation's highest hourly minimum wage at $10.74. The current minimum wage in Washington state is $9.32 an hour.

Earlier this year, Minnesota raised the state's guaranteed wage by more than $3, to $9.50, by 2016. California, Connecticut and Maryland also have passed laws increasing their respective wages to $10 or more in coming years.

Although some local businesses have come out in support of the Seattle measure, a group of restaurant owners opposes it, saying it would force them to scuttle expansion plans, decrease hiring and possibly cut service hours.

Nick Musser, executive chef and general manager of the Icon Grill in downtown Seattle, doesn't think the wage credit for tips should phase out after seven years and finds the differentiation between large and big companies irrelevant.

"The reality is that the larger companies are going to ratchet up their wages and we're going to have to play at that level anyway," said Musser, whose restaurant employs between 50 and 60 people, depending on the time of year. Most of them are paid minimum wage.

Council Member Nick Licata and others spoke of the work and compromise it took to come up with an agreement that could pass the council.

"Others must follow and I hope that they do. But it's not an easy road to go down," Licata said.

Ubah Aden, 40, a Seattle home health worker who says she now earns $10.95 an hour, is looking forward to the way a higher wage will help her support her three children. But she also likes the idea of Seattle setting an example for the rest of the nation.

"If this passes, then it will pave the way for other cities and states. I really think so," Aden said.