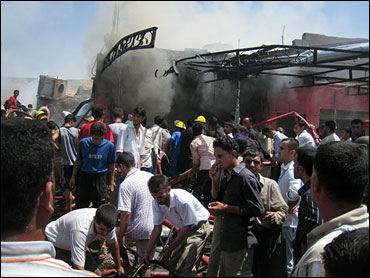 The U.S. military said a helicopter was forced down south of Baghdad Friday, leaving two soldiers injured, and a suicide bomber drove his explosives-laden car into a market in the northern city of Kirkuk, killing at least eight people and wounding 45.

The attack in Kirkuk, a disputed oil-rich city that has seen a recent rise in ethnic tensions, occurred while the capital remained relatively calm under a driving ban aimed at preventing such attacks during a major Shiite pilgrimage.

The U.S. helicopter was en route to support a planned mission when it made the forced landing in Youssifiyah, the military said, adding the cause was not immediately clear from initial ground reports but was being investigated. The two soldiers sustained non-life threatening injuries, according to the statement.

An Iraqi army officer, who spoke on condition of anonymity because he wasn't authorized to release the information, said the helicopter went down after hitting an electricity pole at about 1:30 a.m. He said the raid was targeting a senior al Qaeda in Iraq leader in the agricultural area. Burwell said he could not confirm that report.

Youssifiyah, 10 miles south of Baghdad, is in the area known as the triangle of death for the insurgent activity there.

It was the second helicopter to go down in less than two weeks. On July 31, an AH-64 Apache helicopter went down after coming under fire in eastern Baghdad. The two crew members were safely evacuated, the military said.

Insurgents also shot down a U.S. military helicopter south of Baghdad on July 3, and the two pilots were rescued with minor injuries, the military said.

The deadliest attack struck the market in a predominantly Kurdish area in southern Kirkuk, 180 miles north of Baghdad. The suicide car bomber detonated his payload as the market was packed with midday shoppers buying vegetables and household goods.

Tensions have increased as Kurds seek to incorporate the oil-rich city into their autonomous zone in northern Iraq — a move opposed by Arabs and Turkomen in the area.